The Nurburgring is popular among car enthusiasts who make their best to lapp the thing as fast as possible. Motorcycle riders are equally excited about it and in the video we bring you, you can see that bikers are lunatics even on one of the most demanding tracks in the world. This is, ladies and gentlemen, the fastest motorcycle lap ever recorded on the Nurburgring and what is interesting, it is dwarfed by the hot laps of some supercars and sportscars from before.

As you might know, the motorcycle has two wheels and their tires have a somewhat different construction in comparison with those you can see on car wheels. The surface which makes contact with the ground is much smaller and despite low weight of the bike, the car has a better grip and it sticks better to the ground. That is why the fastest production car of today is more than 13 seconds faster round the ‘Ring in comparison with the fastest production bike – the Yamaha YZF R1. No question that the Yamaha has the power to accelerate like the Porsche 918 Spyder, but it does not have the chance to hug corners as the mighty German automobile.
In the video you will see a rider making a hell of a pass of the ring. We can only guess what would happen if the bike were a Kawasaki H2R and if it were ridden by Motogp or SBK biker. Could it be any faster?

The Nurburgring is popular among car enthusiasts who make their best to lapp the thing as fast as possible. Motorcycle riders are equally excited... 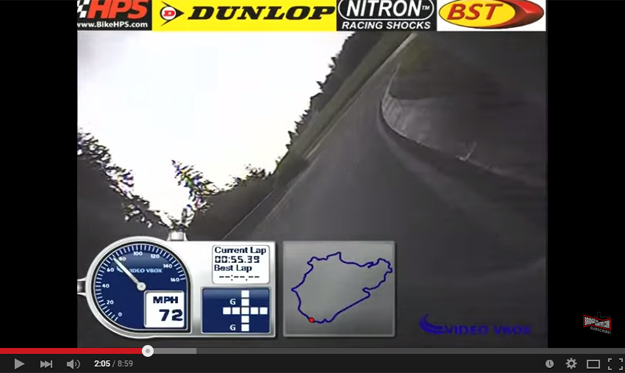