The Toyota Mirai isn’t beautiful, fast or even appealing, but it has one feature the whole world is simply amazed by – it runs on hydrogen! Well, actually it doesn’t run on hydrogen, but hydrogen is used in its fuel cell stack for the production of electricity. By moving hydrogen atoms and oxygen atoms through the fuel cell stack, the two elements are bonded together creating water and releasing a bunch of electrons in the process. The electricity is then stored in the batteries or used for the propulsion of the electric motor while the water is being released as the only waste product. You are right, the Toyota Mirai and cars like it could be the ultimate environmentally friendly cars and just to prove the point, Vadim Ovsiankin, a car journalist with more than 12 and a half thousand subscribers on youtube did the unthinkable. He drank the water that was produced (can we use the word synthesized, it sounds better) just moments before.

As it turns out, the Mirai stores produced water in a small tank for a safe disposal at some point. When Ovsiankin got under and put a Coca-Cola glass under the “opening” it seemed like he was milking the car (or a bull). Toyota let it go and the glass filled up with water. After concluding that it smells like plastic, he had a sip and said that it doesn’t taste bad. Actually, it tasted like sparkling water although sparkling water this is not.
We are quite curious now, could they make the Mirai produce sparkling water!? As crazy as it may sound, the Toyota Mirai can be used in many different ways. Its propulsion system is so smart it can be used as a mobile power plant (sourcing electricity for the community from its fuel cell stack). Also, it produces water (we don’t really know how much of the stuff) and it, literally, doesn’t pollute at all. Awesome! Only one minor issue, though. It is tough as hell to produce in numbers sufficient to be considered a valuable addition to the global motoring scene.

The Toyota Mirai isn’t beautiful, fast or even appealing, but it has one feature the whole world is simply amazed by - it runs on hydrogen! Well,... 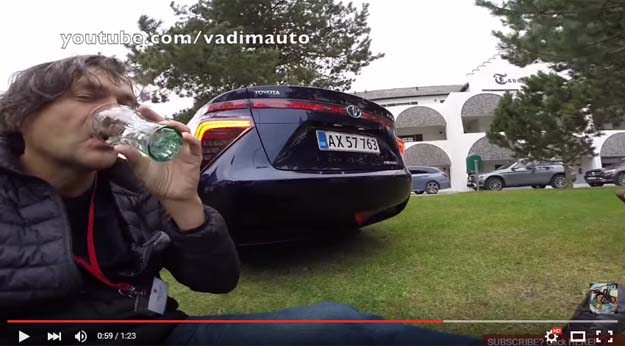