One of the Acura NSX developers stated that the new NSX was ready a few years ago. However, the first version had a mere V6 engine with enough power but without any modern gizmos on it. So, they’ve said to the Honda boss – “this is the car you requested, but with a bit more time, we can make it much better”. He listened and told them to produce something epic and at this year’s Pikes Peak hill climb we had a chance to see the new NSX hitting apexes for the first time ever.

Unveiled as a Pace car for the Pikes Peak, the NSX lead the way for more than 140 contestants who were following it after it finished its run. We will not get into times and speed right now, but we will report that the new NSX is a hell of a fast car. It is a supercar in its own right. Powered by a hybrid propulsion consisting of V6 engine and powerful electric motors, this thing can reach 60 in 2,7 seconds, it can cross the standing ¼ mile in 10,8 seconds while the top speed is governed at 190 mph. So, it is a fast car with all wheel drive made possible thanks to front mounted electric motors. It is estimated that the power of this four engine combo is at 560 HP meaning that the Acura NSX has less power but better performance than the newest Nissan GT-R. It is a sick car and with this Acura released footage we are seeing it for the first time its full glory.
As this is a preproduction prototype, Acura didn’t disclose details about the price, but we can safely estimate that the new NSX will cost north of $150.000. That is a lot of money, but then again, this is a highly powerful car with a lot of technology in it.

One of the Acura NSX developers stated that the new NSX was ready a few years ago. However, the first version had a mere V6 engine with enough power... 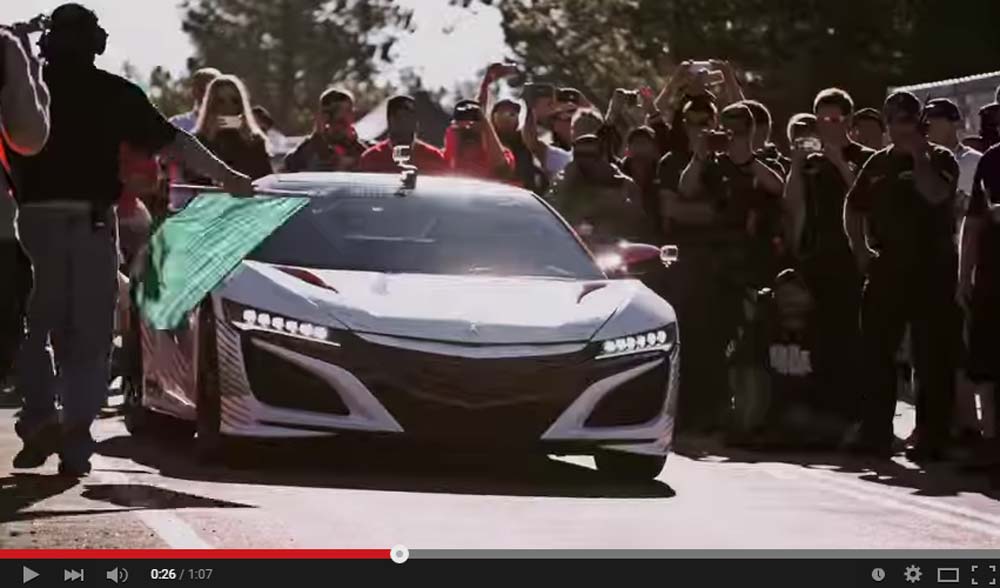