Since Hummer introduced the street legal H1, the popularity of large off road machines and SUVs just surged. Everyone wanted a bigger, better, more powerful and more aggressive SUV. Over time, the world became simply overcrowded with them, but the need did not grow short. We want them now and we want them as powerful as possible. Actually, Germans make formidable SUVs but the full sized monsters are simply a US thing. This time we have the opportunity to glance at the wonderful GMC Yukon Denali tuned by Hennessey.

It is a large monster SUV powered by a 6.2 liter V8 engine which can provide impressive performance even in the stock form. However, this one is modified. With the supercharger, intercooler, high-flow cylinder head, newly programed ECU and a new camshaft the GMC Yukon Denali Hennessey is able to hit 60 mph in 4.5 seconds. Considering the size, unfavourable aerodynamics and the sheer drama of the thing, this result is more than impressive. Power sourced from the 6,2 liter engine is brought to 665 HP and 891 Nm of torque. That is 240 HP more than in the stock Yukon Denali.

For some, a more important fact is that this Denali can reach a quarter of a mile mark in 13.1 seconds hitting 110 mph.

Is that enough? Well, it should be more than enough. Let’s just say that the 2004 Cadillac CTS-V can make the same pass. However, the 2004 CTS-V is not as fast to 60 as this badass GMC Yukon Denali.

We do not know what kind of money all of this costs, but Hennessey people are not known as the most expensive guys in the world. We recon that anyone with a need of a car with more than 690 HP can make this happen for $20k or something like that.

Since Hummer introduced the street legal H1, the popularity of large off road machines and SUVs just surged. Everyone wanted a bigger, better, more... 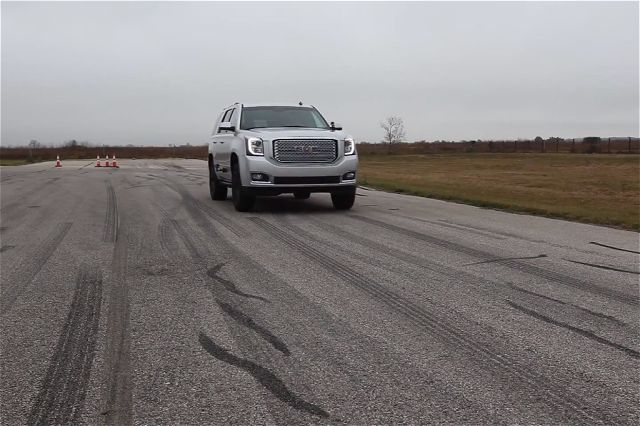