In September last year, Mercedes revealed a vehicle that has the potential to change the world. Named the Future Truck 2025, Mercedes showcased a vehicle with autonomous drive and with the capacity to haul a rather impressively large cargo. What they said at that moment, will almost certainly change the world of trucking forever. If everything goes according to plan, the need for drivers in trucks could be diminished.
However, Mercedes is not the only truck producer under the Daimler hand. Freightliner from the USA is also owned by Daimler and they’ve just revealed the first ever licensed autonomous truck. The truck was unveiled in Nevada, which isn’t exactly a surprise as Nevada is one of the only four states in the US who have regulations on autonomous cars on their roads.

The truck is an engineering masterpiece, a definitive proof of man’s genius and wisdom. Employing Highway Pilot technology consisting of various sensors including two radars, stereo camera and advanced Adaptive Cruise Control, the Freightliner Inspiration Truck became aware of its surroundings which means that, with precise hardware elements used for steering and driving, it became absolutely autonomous. For now, the technology will work only on the highways and it clearly has some limitations. For example, the thing isn’t capable of changing lanes, or overtaking anyone in front of it moving slower than the speed limit. The truck would simply slow down and basically follow the vehicle ahead.
That is why a driver is still needed inside, but now, those driving this engineering masterpieces will have much less work when traveling through the State of Nevada.
All in all, autonomous trucks (and cars also) are coming and they will become better and better in the years to come. However, Freightliner will always be remembered as the first manufacturer who revealed an autonomous truck and that is quite an achievement.

First Autonomous Truck Has Been Presented And It’s Awesome

First Autonomous Truck Has Been Presented And It’s Awesome

In September last year, Mercedes revealed a vehicle that has the potential to change the world. Named the Future Truck 2025, Mercedes showcased a... 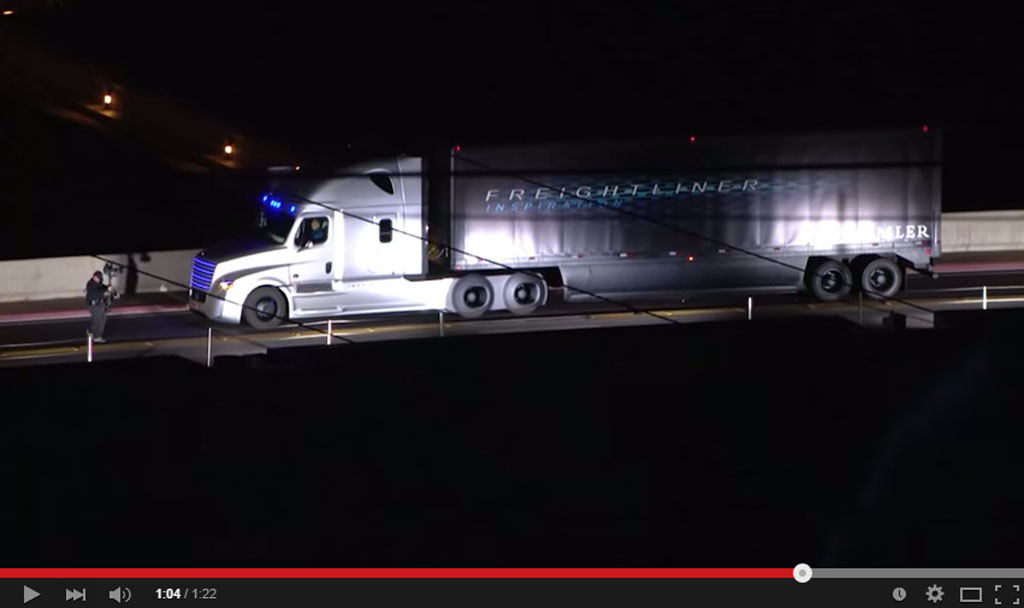