Enormous power and speed is hidden in the Toyota Sienna. Yes, we are talking about the Toyota minivan which is available in the States with the V6 engine developing 266hp. It is not a power behemoth, but for a minivan that is surely plenty of power. Now, in order to unleash all the power and use the van the best possible way, Toyota decided to give the Sienna to Dan Gardner Spec for a bit tuning without upping the power.

After racing the car at the Streets of Willow Springs circuit in Southern California, the team cloaked the time of 1 minute and 42 seconds. 7 second shy of the Camaro V6 time they were aiming for. The work has commenced. Removing the insulation material, seats and basically anything that does not need to exist in a tuned Sienna, the team slashed the weight of the thing by impressive 700 lbs. Next up was the suspension, wheel and tire combo. All of them were changed. All these improvements made the Sienna actually faster than the Camaro V6 by a factor of 3 seconds as the Camaro V6 lapped the track in 1.35.
The bigger challenge was set forth with the introduction of the Camaro SS on the track. The proper muscle car is able to cover the track in 1.29 seconds. Now, the team got back to work. Through additional tune of the suspension and with stiffened parts, the Toyota van was impressively quick but not quicker than the Camaro. Then, limited slip diff installation changed it all. The Sienna, with the stock engine but reworked suspension, LSD and a lot of weight savings was faster around the Willow Springs than the mighty Camaro SS. Incredible.

Enormous power and speed is hidden in the Toyota Sienna. Yes, we are talking about the Toyota minivan which is available in the States with the V6... 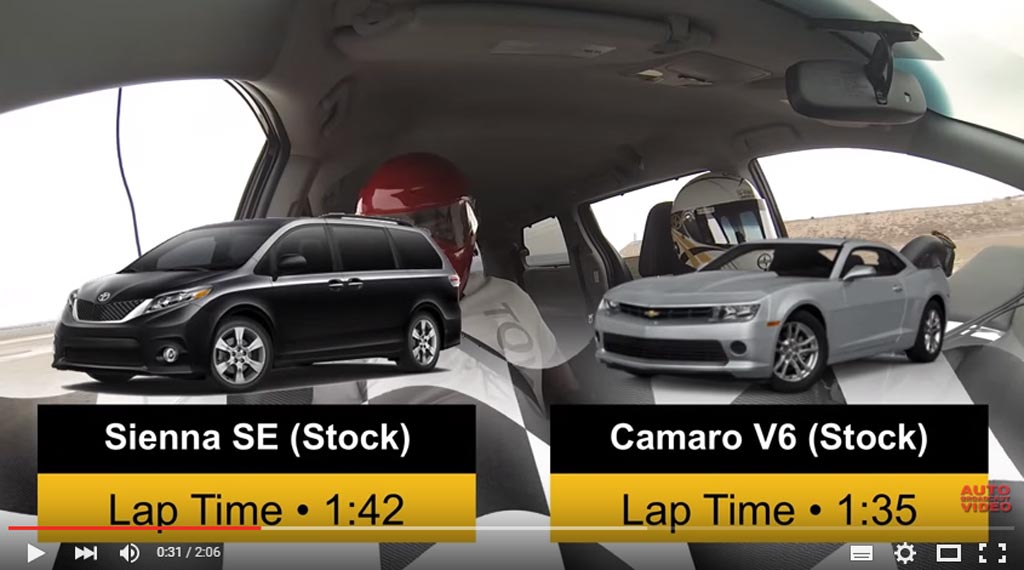