One of the cars that will have an ultimate makeover at the 2010 American SEMA show is the Honda CR-Z.   Wraptivo took the honors of pumping more hype to the car and dubbed it as the Honda CR-Z type F.  This hatchback is wrapped in Matte Black and Carbon fiber film complemented by Mugen bodykit.  This gives the CRZ a sportier stance.

Wraptivo also installed LED daytime running lights and made it stand on Volk racing wheels which are covered with BF Goodrich tires.  They also tweaked the engine to juice out more power and they have done this by remapping its ECU system, installing an improved exhaust system and of course a supercharger to give that engine boost.

It’s about time that the CR-Z is given to the hands of a tuning company because this hatchback badly needs it.  This is actually a hybrid car and doesn’t really breathe tremendous power.  This is powered by a 16 valve inline 4 engine that is assisted by an electric motor that produces a combined strength of 122 bhp with 128 lb ft of torque.  Sluggish power compared to its stunning looks and right now lets just wait and see what will come out of Wraptivo’s garage as there as no specifications yet on what their creation can do. 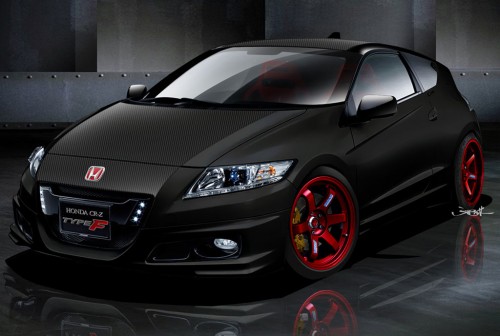 One of the cars that will have an ultimate makeover at the 2010 American SEMA show is the Honda CR-Z.   Wraptivo took the honors of pumping more...