When it was introduced at the Geneva Motor Show earlier in March, the Porsche 911 GT3 RS was possibly the biggest novelty of the show. It is a car that revealed an all new engine, newly developed suspension, upgraded four wheel steering system and even lighter and stiffer chassis the car is based on.
While we’ve already seen the video depicting the car which was revealed by Porsche, now we have an opportunity to peek at it on the real world video captured by the NM2255 Car HD Videos. As stated in the video description the Porsche 911 GT3 RS “looks amazing in person” and it certainly sounds and feels that way too. The video shows us the exhaust sound, start up, revving and acceleration of the 2015 Porsche 911 GT3 RS and it certainly makes the car accessible to people who might never see it in person.

It is not a secret that only a handful of car enthusiast will ever drive this car, but we have to conjure that it is possibly one of all time greats as it features so much advanced technology that any driver sitting in it will feel invincible on the track. The 2015 Porsche GT3 RS is powered by an all new six cylinder four liter wonder capable of producing 500 HP. Despite being just naturally aspirated, the engine is quite happy providing the driver with the torque and power level adequate for acceleration of the car to 62 mph in 3.3 seconds. That, however, isn’t the biggest advantage of the Porsche 911 GT3 RS. This car is considered to be one of the all time greats for any kind of track day activities and the new one certainly follows the path laid out by its predecessors. In the video, you can hear it graul, see it accelerate and admire the technical expertise of the German designer. This is a big one!

When it was introduced at the Geneva Motor Show earlier in March, the Porsche 911 GT3 RS was possibly the biggest novelty of the show. It is a car... 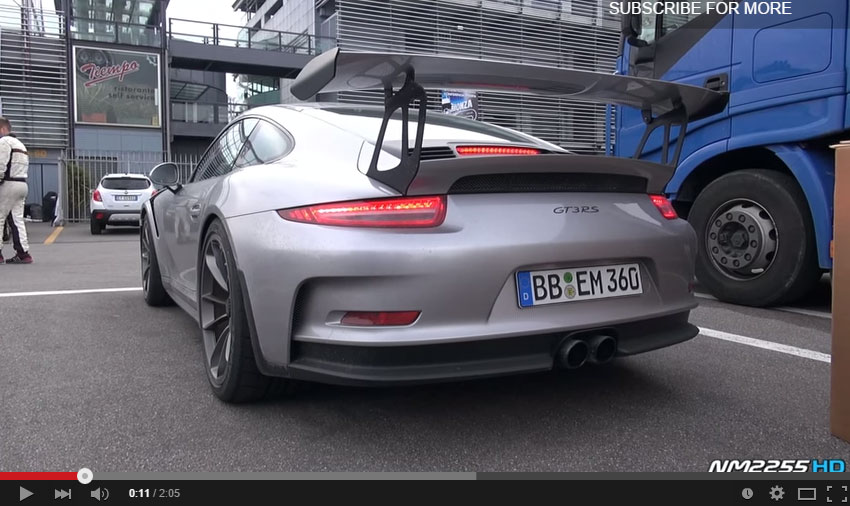