Is Veyron the king of Speed? Not if you ask professional drag racing drivers who manage the cars that can make the Veyron look like a toy. However, the thing is the fastest production car humanity ever devised and its Supersport version can achieve the speed of 268 mph which is much more than the landing speed of a yet aeroplane.
Just to show you how insane this car still is we show it here racing against a specially tuned and prepared Japanese Godzilla! A 1000 HP Nissan GT-R prepared for drag racing is powerful enough to make a quarter of a mile pass in less than 10 seconds. However, the Veyron Supersport racing here is even faster. With its engine good for 1.200 HP and with the Top Speed mode selected, the car succeeded to race the tuned GT-R and to cloak faster time at the special Vmax200 event held somewhere in Britain.

The last Bugatti Veyron Supersport had been produced a few weeks ago and it was revealed at the Geneva Motor show. This one you can see here was produced sometime in the last three years and it is fully stock. Interestingly, the Veyron Supersport is powered by the same engine “normal” (like there is a normal one) Veyron is. The W16 eight liter monster residing inside the Supersport is able to produce 1.200 HP and with all of that power on tap Vmax200 measuring devices cloaked the speed of 224 mph on one of the runs the Veyron made during the top speed weekend.

Is Veyron the king of Speed? Not if you ask professional drag racing drivers who manage the cars that can make the Veyron look like a toy. However,... 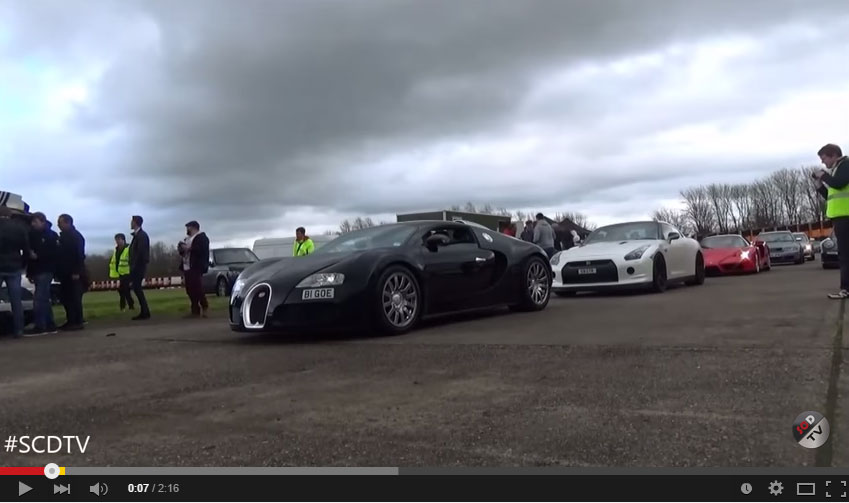