Hybrids are more becoming a craze to the auto industry in both potential buyers and car manufacturers.  They are built only for just one reason and that is for fuel economy.  For speed addicts they are the boring, sluggish and the not so fun cars.  But what can I say…sometimes when choosing your car, you also got to think how much will you be spending on petrol with its soaring prices.

Toyota, who holds the crown for all hybrids with the Prius, will be taking a notch higher.  They have introduced the Toyota Prius C Concept which will be available in 2012.  The current Prius has a mind boggling E.P.A. rated fuel economy of 48 mpg on the highway and 51 in the city with 50 combined.  Toyota said that with the C Concept will even be more fuel efficient.

Nothing still came out from Toyota about its performance and only gave a teaser of what is to come from their line up but they have revealed that this new car will still be using the Prius’ their very own Hybrid Synergy System.  It size will be compared to that of a Yaris and aims at the young singles and couples.   Just keep in touch for more specs of the C Concept. 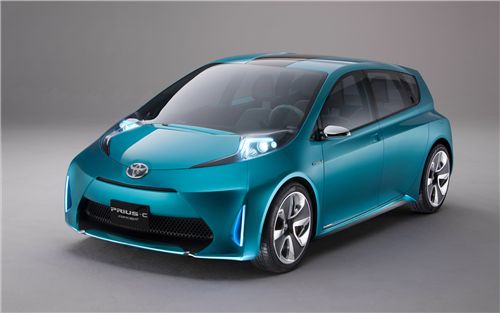 Hybrids are more becoming a craze to the auto industry in both potential buyers and car manufacturers.  They are built only for just one reason and...