The Top Fuel Dragsters are the fastest, most dangerous and most exciting drag vehicles ever devised by the man (much faster than this and this). Following the strict requirements made by the governing bodies like the FIA, the Top Fuel Drag races enables vehicles to hit the speeds of more than 300 mph in just a few seconds thus exposing the drivers to a risk higher than in any other similar sport. The engines in these monstrous cars are running on a fuel called Nitroethanol, which enables the engine to produce 2,7 times the power than it would produce running on usual petrol. It is yet to be determined how much power the engines produce, but according to some calculations based on the speed, acceleration and weight, it is estimated that engines in these monsters produce 8.500 HP to 10.000 HP. That is double the power of diesel locomotive engines, so you can get the picture.

So, when crash happens in one of these vehicles the consequence might be too tough to handle. One Top Fuel Dragster crash happened just a few days ago when Top Fuel driver Larry Dixon crashed during the first qualifying session at the Amalie Motor Oil NHRA Gatornationals. The vehicle was so fast it almost went airborne and the stress on the construction teared it apart. After the crash, Dixon walked away like nothing happened which only shows how important is to have a correct safety equipment on board.
After the fatal accident from 2007, Top Fuel Drag Races were limited to 1.000 feet track length. Due to unbelievable speeds the vehicles achieve, the cars were deemed too fast and too powerful for the quarter of a mile races. It is estimated that during a few seconds run the driver experiences a 4G acceleration pressure and that is something that many planes can’t produce.

The Top Fuel Dragsters are the fastest, most dangerous and most exciting drag vehicles ever devised by the man (much faster than this and this).... 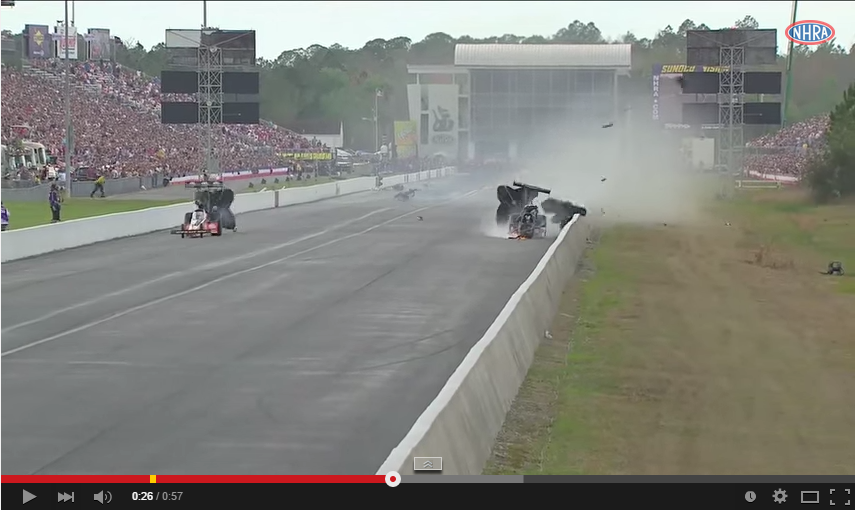