Racing at the Classic car race Prescott Speed Hill Climb back in the 2013, Edmund Burgess, a famous and well known collector of classic cars was driving his meticulously maintained and perfectly crafted 1924 Bugatti race car. The 56 year old director of the Bugatti Owners Club from Lavenham, Suffolk raced that day a 1924 Bugatti Type 35, which was, at the time of its creation, the only car in the world which could be driven on the roads and during the races. It is a vehicle powered by a two liter engine (later by the 2.3 liter engine with compressor) and it was so well made that it won many races back in the time it was raced.

Unfortunately, during the race Prescott Speed Hill Climb, its owner Edmund Burgess wanted too much out of it and started to drive it very hard and aggressive. The car did not hold on and when Burgess wanted to make a 90 degree turn on one of the most demanding curves of the race, the brakes failed. As he was driving more than 30 mph over what was considered safe, the brakeless 1924 Bugatti went off track, tumbled, rolled and almost killed Burgess in the process. Interestingly, the car spectacularly made a turn and if there was a bit more room, it is certain that Bugatti would continue. However, the 250.000 British pound worth car flipped and the damage was done.
“When I saw how damaged the car was, I was amazed I could pull myself out and walk away. I was very lucky,” Edmund Burgess said after the accident.
Nevertheless, the car was restored to its former glory a few weeks after and it still continues to be one of the most precious commodities in Great Britain.

Racing at the Classic car race Prescott Speed Hill Climb back in the 2013, Edmund Burgess, a famous and well known collector of classic cars was... 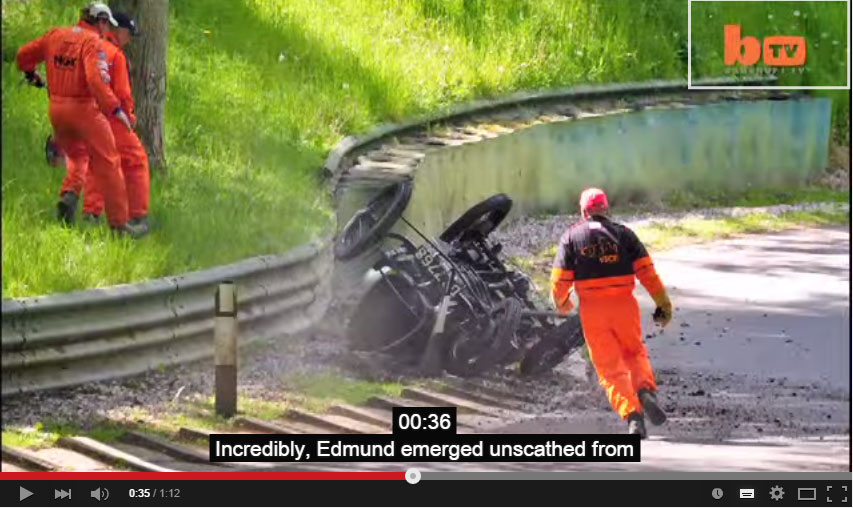