The company is called Big Toyz Racing (BTR) Motors and they excel in the “art” of building the most notorious monster trucks in the world. They’ve been doing so for years now and their latest attempt in creating something really special ended up so good that they’ve put it on video and they are trying to sell it… for 1 milion bucks. This is – ladies and gentlemen – a truck called the Sin City Hustler and it is the longest and the biggest monster truck you’ve ever seen.

Some details about it reveal just how extreme this thing is. BTR team had to architect and construct a massive 1.500 feet of tubing to create the architecture which is capable of supporting this magnificent truck. That added a lot of weight. Actually, the normal Ford Excursion (this is based on it) weighs somewhere around 5000 lbs. This is three times that – 15.000 lbs. All of the suspension had to be reconfigured. With massive 66 inch tires, this Ford Excursion received an all around four link independent suspension enabling the driver to go with it where he desires. The four wheel steering is also added with automatic steering at the back. This way, the massive Excursion can make stunts any other smaller monster truck can do.
The most important part of it is the cabin. With 12 special sports seats inside, this Excursion can provide unforgettable moments for more than two at a time. That was the idea behind it and BTR now wants to cash in. No wonder there as this is the most brutal thing on four wheels we’ve seen so far.
It is powered by a special 8,5 liter V8 engine developed to provide 700 HP. It is enough to haul this thing over the dunes anytime and anywhere.

This Is The Most Insane Ford Excursion Ever

This Is The Most Insane Ford Excursion Ever

The company is called Big Toyz Racing (BTR) Motors and they excel in the “art” of building the most notorious monster trucks in the world.... 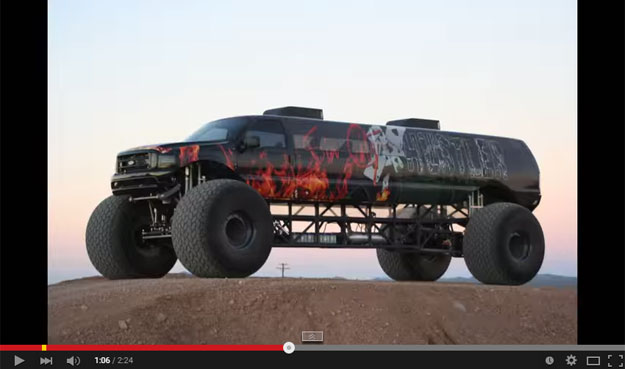