Americans love it bigger. Take a look at this magnificent truck powered by three jet engines. Yes, three jet engines! The truck itself is a 1957 Peterbilt semi truck with jet engines strapped at the back. It is estimated that the system develops preposterous 36.000 HP. That is more than some jet powered airplanes develops. Of course, with it the truck can reach stratospheric speeds on the land and it definitely showed all its glory in this video we bring to you.

It is called Shockwave and it can reach more than 375 mph. You’ve read that right – 375 mph. More impressive is the fact that it measures the acceleration not to 60 mph, but to 300 mph. Providing full thrust, all three engines can catapult the thing to 300 mph in only 11 seconds. That is jet fighter territory, no question there. The truck actually raced jet powered airplanes and it even won some of the races.
In the video the driver and the operator of the truck report that during acceleration they can hit 6 Gs but the deceleration is even more impressive. Stopping the outrageous truck are two parachutes that shout out when the power is cut to the jet engines. In a matter of seconds, the acceleration of 6G becomes deceleration pulling out 9Gs. That is something only fighter pilots can experience. 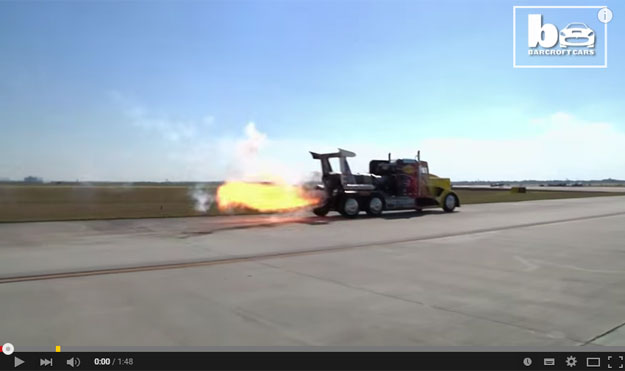