Trying to create a 200 mph beating 2015 Ford Mustang, the famous tuner from the US, Hennessey, tried all sort of stuff, including giving the ‘Stang some rather worryingly large superchargers. Despite all of their ingenuity and all of their wit, the 200 mph Ford Mustang wasn’t going to happen in a timeframe they’ve set for themselves. The first car called the Mustang HPE700 for apparent power reasons, was crazy enough to reach the maximum speed of 195 mph. That is a lot, by any measure. Well, aeroplanes take off at 50 mph less than that which says a lot.
Hennessey, as the real knight of tuning did not want to back off. Trying all over again to create the fastest 2015 Ford Mustang, Hennessey Performance developed a special tuning kit, now called the HPE750. Obviously, the power rose , but not to 750 HP. It rose to 774 HP. That is more than you could get from any Ferrari (except the hybrid), from any Lamborghini, or from any Porsche. This is the sort of power you’d only expect from a really really fast American drag car.

Trying to beat the record at the Continental Tire Proving Grounds on the 8.5-mile long high speed oval located in Uvalde, Texas, Hennessey made history. Their newest, yellow Mustang GT reached the speed of 207,9 mph becoming the fastest new generation Mustang in the world.
To mark the occasion the best way possible, Jay Leno, one of the most famous gearheads in the US was right there when they’ve broken the record. This was a very successful day for Hennessey, it was a very successful day for Ford and those wanting to own this car will be happy as well. Hennessey will sell the 500 HPE750 tuning kits, thus making 500 Mustangs which can go over 200 mph.

This Is The Fastest New Generation Mustang In The World

This Is The Fastest New Generation Mustang In The World

Trying to create a 200 mph beating 2015 Ford Mustang, the famous tuner from the US, Hennessey, tried all sort of stuff, including giving the ‘Stang... 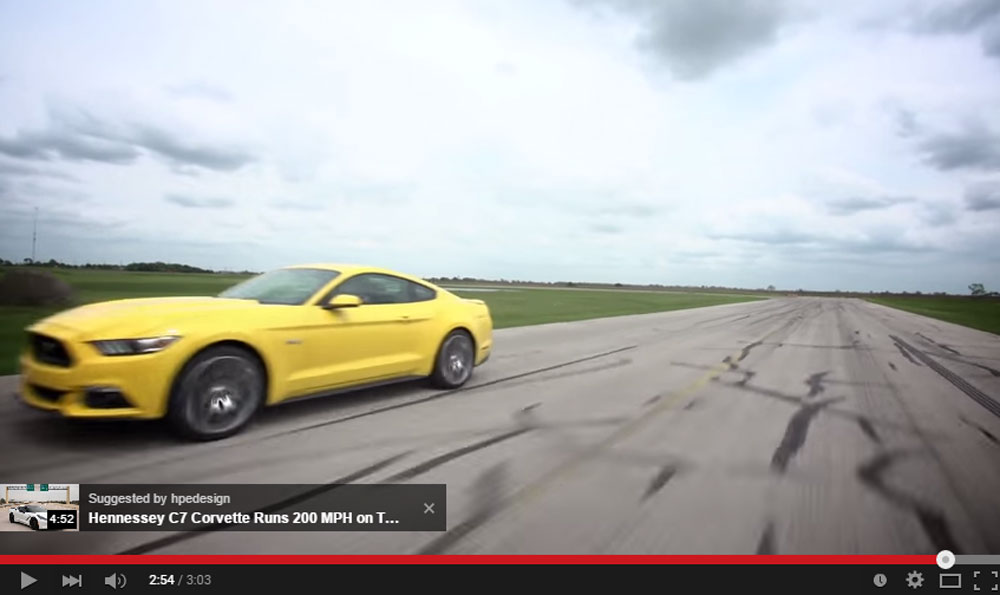