We wrote many articles about the Tesla Model S (like here, here and here) on the Carnimal.com website. However, the video embedded here will additionally blow already shattered gearheads’ minds. This is a clever Dragtime road test of the Tesla Model S with the Autopilot feature enabled. We are quite sure; this car test is the one where the driver actually held the wheel the least. Autopilot is a system enabling semi-autonomous drive. It apparently works so well, the driver almost does not need to keep his hands on the steering wheel.

Elon Musk announced this feature quite a while ago and now, it seems he got it certified for use in a lot of countries all over the world. This video was captured in the US and the presenter shows all the features not by driving the car, but simply by sitting in it. Awesome.
Apart from the car that drives all by itself, this video brings up something even more important than that. If you forward it to 12.45, the host will start talking about the speeding ticket the Tesla Model S with Autopilot turned on actually received. The car was driving down the highway at 75 mph, but it did not recognize the sign by the road that limits the speed to 60 mph. The car continued driving at 75 mph and a police officer pulled it over. Luckily, the driver received the minimum fine. What is astonishing and quite disturbing here is the fact that the Tesla Model S actually made a traffic violation. Ok, they will make it work flawlessly in a year or so, but let us repeat this – the Tesla Model S (not its driver) made a traffic violation. ROBOT MADE A TRAFFIC VIOLATION. Yes, this is the world we are living in. Better not die soon, because some sick stuff is going to unfold in the next decade or two.

We wrote many articles about the Tesla Model S (like here, here and here) on the Carnimal.com website. However, the video embedded here will... 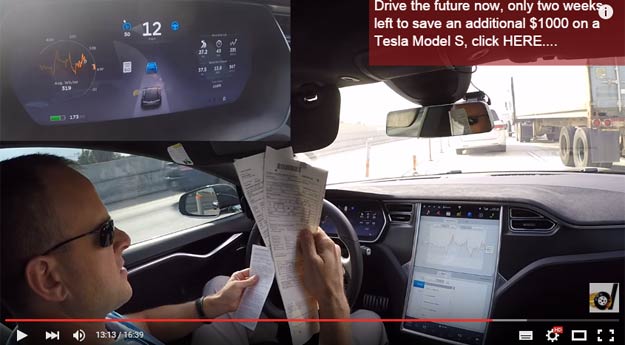