The Alfa Romeo Giulia QV is still hot in the car world. With enthusiasts all over the world waiting for its introduction on the market, the auto paparazzi are doing all they can to capture as much stuff about it as possible. One of the most amazing Giulia QV Spy videos was captured at the Nurburgring. The official Alfa Romeo test driver was out trying to figure some stuff about it and record a whole lot of data about the car’s behaviour on the road but he was unaware of the BridgeToGantry host who drove a Seat Leon Cupra 280 behind him. The small Spanish wagon succeeded to follow the Alfa despite the thing being powered by almost twice the powerful engine.

As a refresher, the Giulia QV is powered by a Ferrari engineered three liter engine which produces north of 500 HP. That is a lot of power. On the other hand, the small Seat has a Volkswagen two liter turbocharged engine developing 280 HP. These two cars are so far apart one from another that we are quite surprised how did the BridgeToGantry driver succeed to follow the mighty Alfa. Obviously the Alfa Romeo test driver didn’t drive a fully completed car and he was not supposed to go all out with the Giulia.
All in all, this lap is worth seeing. The man in the Seat wonderfully followed the Giulia QV with the commentary and the Seat behaved exceptionally well. Here, you can see just how cool and how amazing can the Nurburgring Nordschleife be and if you ever get the chance to visit it, don’t think twice.

The Alfa Romeo Giulia QV is still hot in the car world. With enthusiasts all over the world waiting for its introduction on the market, the auto... 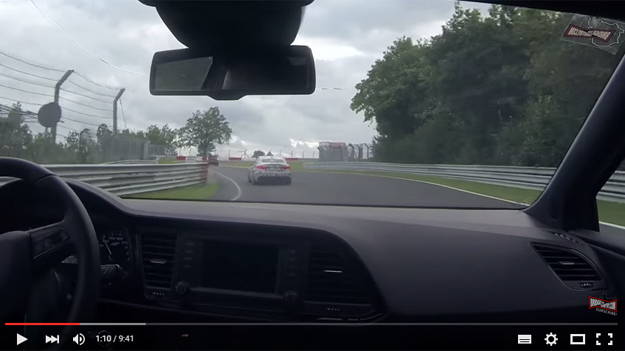