Ever since Bugatti released the Veyron sometime in late 2004 and since all of us have seen what this machine is capable of doing, the whole motoring industry asked only one thing – would it be possible for any other car to top that what Volkswagen engineers did!? The answer is yes. Koenigsegg did produce more than a few vehicles which are faster, nimbler, more aerodynamic and more powerful than the Veyron. However, Koenigsegg is a small company and no one takes it seriously in terms of its impact on the car world just yet.

That didn’t prevent the Koenigsegg chief, owner, CEO and everything – Christian von Koenigsegg to race Bugatti and Koenigsegg cars. This new footage released in September shows the 2008 Bugatti Veyron 16.4 (not the SS) driven by Christian in a race against one of the most praised Koenigsegg creations – the 2008 Koenigsegg CCXR. This is a fight of power, engineering and top-notch performance with von Koenigsegg being the biggest critic of his own work.
With a rolling start the GTBoard.com shows us just how massively fast both these cars are with Christian having the last laugh here. Driving a 1.000 HP Bugatti Christian definitely learned something about refinement, insane attention to details and quality, but you’d have to peek at the 72 second video to see did he learn anything about speed.
To put things into perspective, the CCXR is a 1.018 HP car while the Bugatti Veyron is a 1.001 HP car. Both are almost insanely powerful with the Bugatti having n all-wheel drive and the Koenigsegg sending its power only to the back. On the other hand, the Koenigsegg CCXR has much less weight.

Ever since Bugatti released the Veyron sometime in late 2004 and since all of us have seen what this machine is capable of doing, the whole motoring... 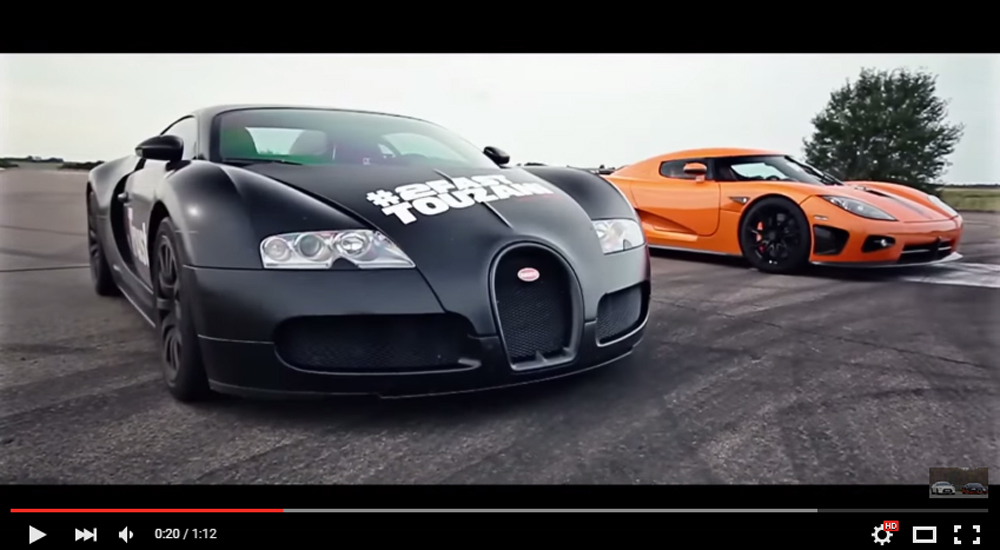