The Nissan GT-R is still one of the sickest cars ever. Although it was revealed almost eight years ago, with the yearly updates, the vehicle is still going up strong against every new car it comes out. One of the newest counterparts comes from Britain and it is the Jaguar F-Type R Coupe. However, this is not just any F-Type. This one comes with an all wheel drive meaning that the power is nicely balanced out between the front and the rear wheels and the acceleration is much more brutal than before! How brutal you may ask!? Well, officially the F-Type V8 AWD goes to 60 in 3,9 seconds, but the measurements Autocar had taken show that this Jag can hit 60 in 3,6 seconds. That, however, isn’t even near the level of the Nissan GT-R who just trashed the Jag of the line.

Really, it is astonishing to see just how powerful and mighty does the GT-R look in comparison with any other car. Nothing short of incredible was its race against the F-Type where the vehicle succeeded to pull out so ferociously against the Jag, it is a bit sad. What’s more, on the UK market, the Jag is even more expensive than the GT-R. And it’s not like it is more expensive by a couple hundred of quid, but by more than 10 grands (91.950 British pounds vs 80.000 British pounds). That’s huge. Also, the Jag has a bit more torques, but it lacks smart launch control that Nissan is famous for.
However, the Jaguar isn’t all about straight line speed. It is a vehicle that brings excitement and fun in the world of laser precise supercars. It is a sports car in the purest sense you can imagine.

The Nissan GT-R is still one of the sickest cars ever. Although it was revealed almost eight years ago, with the yearly updates, the vehicle is still... 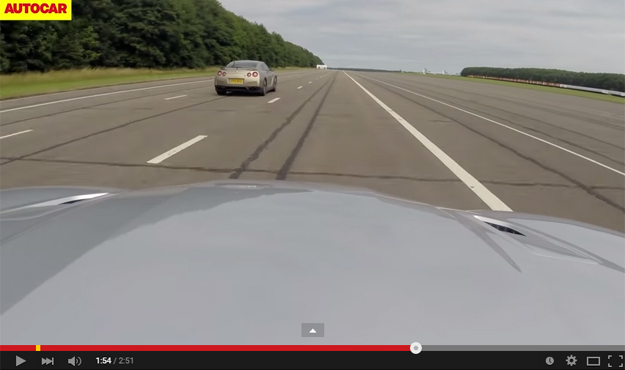