This is the quickest run in the history of Funny Car competition organised by the American NHRA. Jack Beckman was behind the wheel of his specially prepared Mopar Dodge two weeks ago when the mighty 8.000 HP cars were starting their run for the money in a magnificent showdown at the Sonoma Raceway.

After the fatal accident in 2008, the NHRA shortened the track by 320 ft. Before, it was a quarter of a mile race, but after 2008 the race was shortened to 1000 ft and the cars weren’t able to achieve their usual speeds. However, the record you see here is for the new track and when you think about it, it’s Biblical. The specially prepped car succeeded to cover 1000 ft in exactly 3.921 seconds at 323.43 mph. Basically, this thing can accelerate to 323.43 mph in less than 4 seconds. To put that into perspective, we will just say that many of the world’s fastest cars, including the Porsche Carrera GT, can accelerate to 60 mph in that time.
Powered by specially prepped engines located in front of the driver and run by nitromethane the engines deliver around 7.000 HP to 9.000 HP and more amazingly can produce up to 7.000 lb ft of torque. We don’t have to compare it with “normal” cars because these things produce up to 1.000 HP per cylinder. That’s huge. To produce all that power, the engines are built using special alloys, titanium built connecting rods, titanium valves and other. The pressures inside the combustion chambers would shatter the normal engine in seconds.

This is the quickest run in the history of Funny Car competition organised by the American NHRA. Jack Beckman was behind the wheel of his specially... 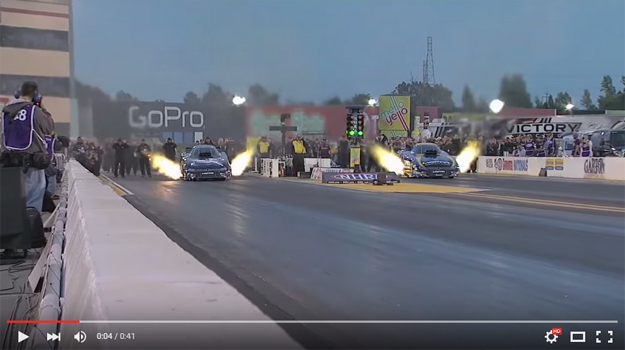