We all remember that awesome Ford video series about the development of the Ford Mustang. Now, a similar video is going to be made about the magnificence of the new Ford Mustang and here is a glimpse of what is before us. The Ford GT is the first proper racing car in a long time. It was created and made for the sole purpose of winning the Le Mans and in doing so it will enable Ford to produce a number of road going cars comparable with the likes of the McLaren 650S and the Lamborghini Huracan. Bearing the name of the legendary Ford GT car series, the new GT is a passionate expression of the Ford Performance team and it looks awesomely cool.

In the first video of the series, we learn that the car is developed through constant aerodynamic improvements. It looks like this due to aero laws, its suspension is specially developed following the wind tunnel findings and choosing the engine also depended on the aerodynamics. The old V8 was disregarded and in its place a much more advanced, improved and more powerful V6 EcoBoost was installed.
Shown at the Sebring test track, the Ford GT already looks like a car that will be able to take on the Le Mans series and possibly win. It’ll not compete in the top notch LMP1 class, but it’ll show its muscle in the GT class which is, possibly, even more interesting.

We all remember that awesome Ford video series about the development of the Ford Mustang. Now, a similar video is going to be made about the... 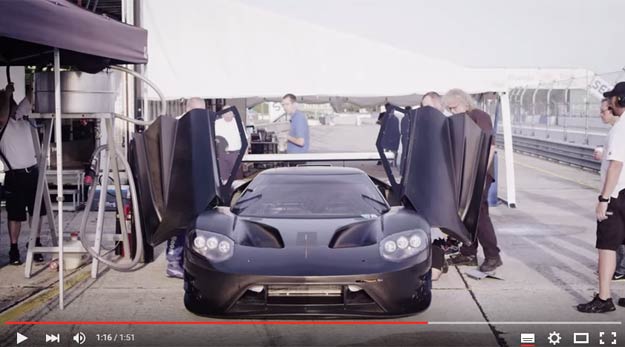