All speed freaks get ready for one great news! The Bugatti Veyron will be back in 2013 ready to beat its own chart topping record.  They are preparing to make sure that the new Veryon will pass 270 mph or 434.52 km/h mark.  This was the record set by the Veyron Super Sport.

The next Veyron is said to take some design cues to the original Veyron Concept by Walter De Silva, who is now head of design at VW group.  His design was not revealed to the public and the pictures showing here is the one created by John Mark Vicente of Canada, he called his design as the Bugatti Renaissance.

The heart of the next Veyron is still an 8.0 liter W16 engine fitted with 4 turbo chargers mated to a seven speed dual clutch tranny.  Power output is also likely the same with the Super Sport breathing 1,200 bhp with 1,500 Nm of torque.

0-100 km/h is seen to slightly improve basing from its previous record of 2.5 seconds.  To achieve Bugatti’s enormous feat of breaking its own record, they will need a helping hand from Lamborghini for the weight reduction expertise.

You know this car company can do it but you just can’t help get excited on what will the new Veyron really look like! 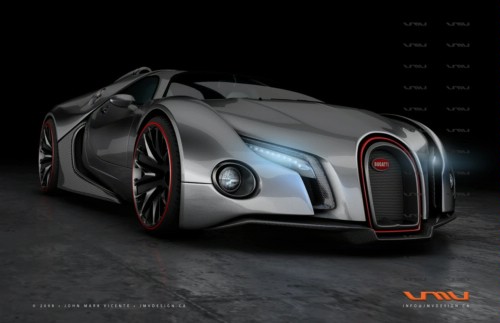 All speed freaks get ready for one great news! The Bugatti Veyron will be back in 2013 ready to beat its own chart topping record.  They are...