The new BMW 7 series (check this old one by Mansory too) is here and it is better than ever. Actually, it might be even better than that. It might be the best production car ever conceived. Innovations revealed with this car are staggering. BMW obviously did all it could to redevelop the whole concept of car production by making a whole new platform for this car. As it is a modular platform, it will underpin all the “true” BMWs in the future such as the 3 series, the 5 series and the 6 series. Now, however, we have to learn what makes it so special.

First of all, the BMW 7 series has an all new frame composed out of steel, aluminum and CFRP elements. This is the first use of CFRP in such an extent and on the 7 series all the major parts of the frame were made or reinforced by CFRP elements. The result is a considerable weight reduction of up to 286 lbs compared to the previous generation car.
In this video you can basically see the interplay of steel, aluminum and steel elements which is something unprecedented in the industry up until this moment.
True, Mercedes did something similar but they did not use CFRP. The frame is so stiff and strong it is considered that the new 7 series could really be the safest car on the roads.
Apart from the innovative construction method, the new 7 series received a standard two axle air suspension, a wealth of advanced driving aid technologies and the most advanced infotainment system with gesture control system.
At the beginning the 7 series will be available with a diesel engine and two petrol units. A hybrid good for 326 HP is available too.

The New 7 Series Is Out And It’s Simply Epic

The New 7 Series Is Out And It’s Simply Epic

The new BMW 7 series (check this old one by Mansory too) is here and it is better than ever. Actually, it might be even better than that. It might be... 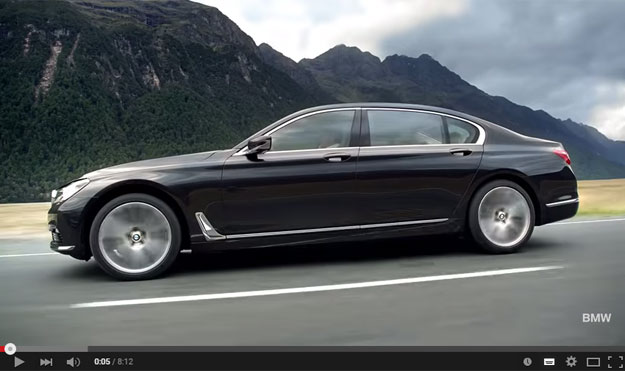