After a triumphant run last year, Chevrolet will be back again at the infamous WTCC competition and unveiled their 2011 WTCC Chevy Cruze. This automaker received different recognitions in the 2010 contest. Using the Cruze, they were awarded on the Drivers’ and Manufacturers’ crowns category. Their new model is a tamed version and guided by the new FIA rules.

This racing car embodies the new rules set by the organizers, a smaller fuel efficient turbocharged engine. This will be an exciting race as the new rules have taken into place. WTCC have changed powerplant specs from naturally aspirated 2.0 liter engines to a 1.6 liter unit.

The heart of the new WTCC Chevy Cruze is a turbocharged 1.6 liter madness that pumps 306 bhp with 247 lb ft of torque. The new muscle powering this race car forced the Cruze to have some design changes. This includes a new front suspension, modification on the ancillary engine and cooling systems, new brakes and a revised aerodynamic package.

This will still be driven by world champion Yvan Muller in the number one car with Rob Huff on the number two. The 2011 WTCC will kick off next weekend at the Curitaba race in Brazil. 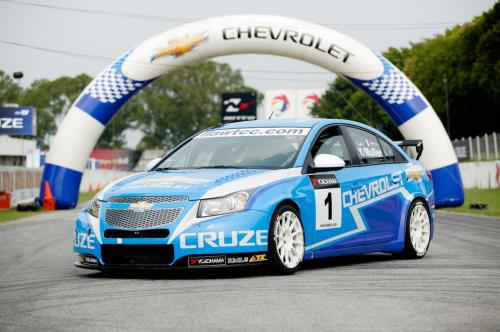 After a triumphant run last year, Chevrolet will be back again at the infamous WTCC competition and unveiled their 2011 WTCC Chevy Cruze. This...