We have been waiting for this one for quite some time. Finally someone had the *alls to put three of the world’s fastest hypercars in a drag race and the results ended up being quite unexpected. As we know from before, Paul Bailey is a man from UK who likes cars and who have all three of the hybrid supercars of today. He actually went to buy the third – the Porsche 918 Spyder, with the McLaren P1 and the Ferrari LaFerrari. He is that crazy about the supercar world.

Now, racing all three cars is quite an undertake not attempted before. Ferrari was clear – no man, journalist or any other entity who has the chance to race the LaFerrari against the Porsche and the McLaren can film his endeavours. However, Paul Bailey is a badass who does not give a shit about the strange rules imposed by Ferrari. Actually, Ferrari promised that they will refuse to sell any other high-grade supercar to the person who does the forbidden.
The race of all three cars on the Santa Pod race track revealed an incredible fact. The least powerful Porsche is so tough to beat that the guys who drove the cars tried all kinds of tire pressure changes and the like to make the LaFerrari and the McLaren act the best they could.
For the end results of this highly incredible and extremely anticipated race you will simply have to zoom through the video and we are sure you will enjoy every second of it.

We have been waiting for this one for quite some time. Finally someone had the *alls to put three of the world's fastest hypercars in a drag race and... 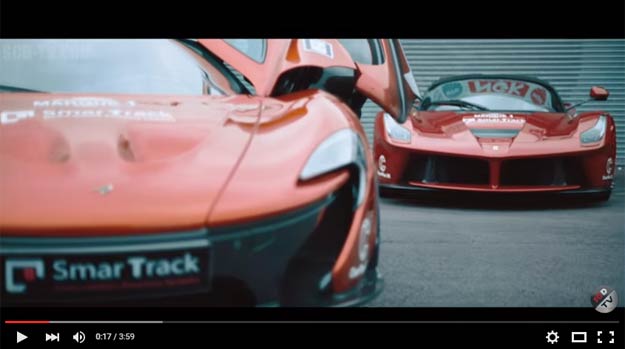