Autbuzz did something everyone who ever used Uber dreamt about. They registered the McLaren MP4-12C as the Perodua Myvi and used it to pick up clients. No wonder everyone was simply mesmerized by one of the best British supercars in the world. Uber is obviously working fine. They made a revolution all over the world, but Taxi companies are largely affected by Uber. Actually, they are affected so much that in some cities were marked by rather serious taxi driver riots against Uber drivers. The situation escalated in some Eastern European countries and in Paris the taxi drivers were so pissed of that they started burning the Uber cars.

However, the westerners embraced the technology better than anyone else, and the video embedded here clearly shows that they are enjoying every minute of it. The experiment was made in Telawi, Georgia where a man driving a McLaren picked up clients with it. The look on the face of the clients and their astonishment by the McLaren clearly shows that money maybe can’t get you happiness, but it can get you a McLaren and that is close enough.
Astonishingly cool McLaren was a very successful driving for Uber and the guy driving it was asked by a pretty lady: “How old are you?” and that says it all really.
As a refresher, we have to say that the McLaren MP4-12C is a vehicle powered by an eight cylinder engine producing more than 600 HP. That is crazy amount of power for a small engine and it provides the MP4-12C with the performance of a supercar.

Autbuzz did something everyone who ever used Uber dreamt about. They registered the McLaren MP4-12C as the Perodua Myvi and used it to pick up... 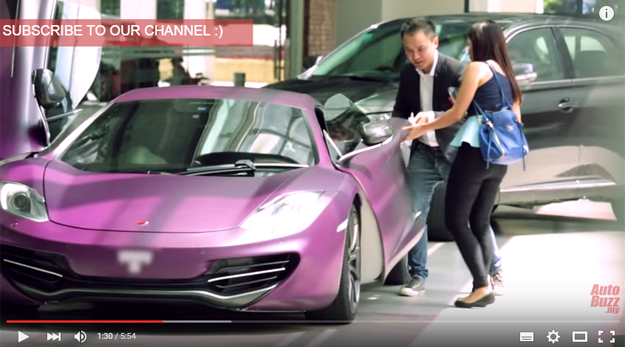