May the forced induction be with you! And here it is. The McLaren 650S and the Mercedes-Benz AMG GT S are on the track in a final drag race showdown where every kilogram of saved weight and every HP juiced out from the engine counts. It really is easy. With a rolling start, two of the best and most amazing sports cars of today are in a run for the title of the drag king. There is a catch however. This isn’t a fair race. The AMG GT S isn’t a real competitor for the supercar such as the McLaren 650S, but if you have them both in the same time on the same closed airfield, what would you do!? Would you park one and take another one for a spin, or race them!?

The 510 HP four liter V8 in the AMG GT S is a hell of an engine. However, the Ricardo built McLaren engine is smaller, lighter, it has the same number of cylinders and it produces 140 HP more. That is a lot, by any count. Even more amazing, the all carbon fiber McLaren wonder is more than 240 lbs lighter than the AMG GT S and that makes some difference.
Looking at the race from one angle won’t make you happy, so the GTboard.com team did a proper job and filmed the race from multiple angles demonstrating the power of both vehicles. While the Mercedes-Benz AMG GT S is supremely fast and capable in comparison with the cars from the same segment, it falls far behind the mighty McLaren. Of the line, the speed isn’t so different. Both cars hit 62 in around three 3 seconds. The real fun starts at higher speeds. The lighter, more powerful McLaren has an edge. We can’t wait to see how the McLaren will stack up against the Mercedes-Benz AMG GT Black Series.

May the forced induction be with you! And here it is. The McLaren 650S and the Mercedes-Benz AMG GT S are on the track in a final drag race showdown... 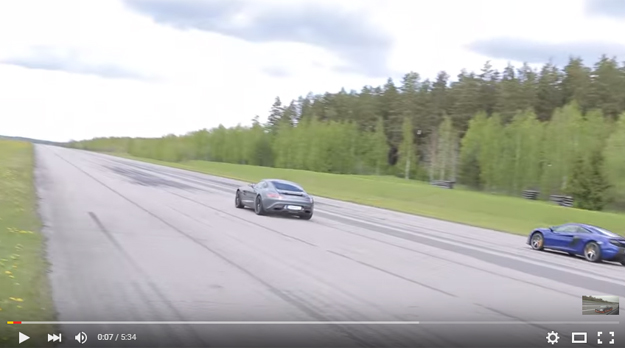