Some have Launch control, other Start control and the new Lamborghini Huracan has a Thrust Mode. The numbers for this are only saying half of the story. Basically, when it’s activated, every system in the car is specially prepared to provide the Huracan with the best possible acceleration. The gearbox goes to its maximum ferocious setting, the engine provides as much power as possible, four wheel drive system smartly channels power to all four wheels making the most of traction and the car sorts all the things itself.

Some reported that the acceleration of the Huracan is so astonishing it can trash 60 mph in 2,5 seconds. American Car and Driver reported that they’ve cloaked the time of 2.5 seconds which is better than many supercars (even better than the Lamborghini Aventador). However, we have to say that we didn’t see anyone else cloaking that time. Nevertheless, this is still astonishingly quick car with the official 0-60 time of 3 seconds. In this video we have a chance to see just how cool this thing is while accelerating from 0-124 mph. If you really want to go geeky about this pause the video at the instant when the car lifts of, write down the time and then pause again when it reaches 124 mph (200 kph). You will be amazed. All of this is happening on a normal country road in some small city, so you can imagine that it would be much better on the perfectly even tarmac of the race track on a day when the right conditions are met and on the right tires. We guess that Car and Driver really had that luck to have all these things and they’ve nailed it. All in all, the V10 monster from Lamborghini is possible the best you can get in this segment.

Some have Launch control, other Start control and the new Lamborghini Huracan has a Thrust Mode. The numbers for this are only saying half of the... 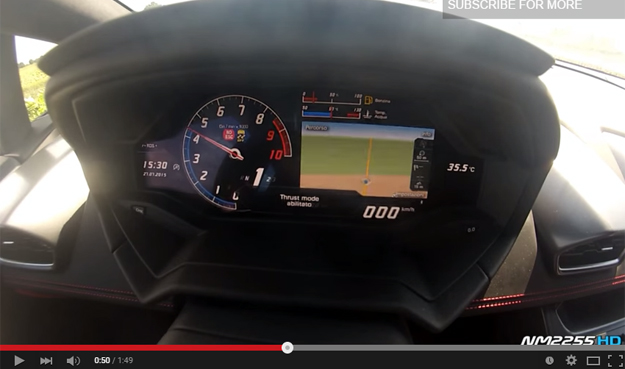