Making burnouts and donuts in some used muscle car or an old Beemer is something we can grasp and something we almost appreciate, however, making donuts in something so special and precious as the Ferrari LaFerrari is clearly next to idiotarian. Visiting the SupercarDriver’s Secret Meet in his McLaren 650S, a famous supercar vlogger Shmee150 captured a video of the Ferrari LaFerrari (Check out sick LaFerrari based FXX K) doing burnouts.

To put into perspective how outrageous this really is we will just say that Ferrari made (or will make) only 499 units of it and apparently, every one of them is already sold. The car costs in excess of 1,7 million US dollars and it is possibly the most advanced vehicle ever created by humanity (along with the McLaren P1 and the Porsche 918 Spyder to be completely fair here). The propulsion system in this monstrous car is composed out of a 6,3 liter V12 and a 163 HP electric motor which makes the hybrid system produce 963 HP. That is something Ferrari never did before and they’ve done it so good for the first time that the car can achieve the speed of 186 mph in 15 seconds and it will continue to 217 mph.
Now, making a burnout and a donut in such a precious car is next to lunacy. The burnout and donuts weren’t so spectacular mainly because of the unusual surface found in the hangar where the SupercarDriver’s Secret Meet was held (somewhere in Bruntingthorpe for all we know).
Shmee150 clearly made a great video and in four days more than 150.000 people have viewed it online.

The LaFerrari Doing Donuts Is Next To Sacrilege

The LaFerrari Doing Donuts Is Next To Sacrilege

Making burnouts and donuts in some used muscle car or an old Beemer is something we can grasp and something we almost appreciate, however, making... 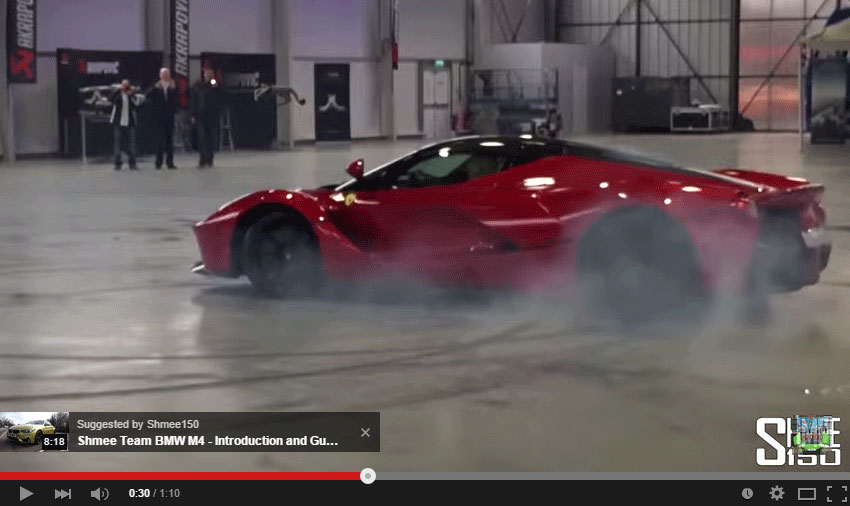