Ever heard of Jon Olsson? Well, he is quite a remarkable figure! As a stunt skier and professional skier for Sweden he certainly knows how to steer people’s attention from skiing to his other hobbies. A hobby he certainly enjoys the most are his cars which he simply adores. We have already seen some of his incredible monsters on four wheels. Take a look at this Audi, or at this Lambo – both are mindblowing!

For this year, the man really wanted to create something special and with the help from the former Koenigsegg Chief engineer Leif Tufvesson (who made some crazy *hit when working with Von Koenigsegg) he created a magnificent and absolutely insane Audi RS6. Making it compatible with other Jon Olsson cars, Leif did his best to create a wonderful exterior paintjob that continues the theme previously seen on Jon Olsson cars. However, that was just one step. Teaming up with Stretman Motorsport, he was able to create a one-of exterior body kit clearly recalling the vehicles from the DTM. Watch this amazing video and see how the front bumper gracefully goes through snow.
The whole body kit has been formed using CFRP (Carbon Fiber Reinforced Plastic). Lightweight parts certainly help the mighty Wagon to lose some pounds and they show that this thing is something of a homage to the racing series DTM. To add just a bit more street appeal, Jan Olsson ordered the integration of a special CFRP roof rack.
Styling Changes, however, aren’t the changes you want to read about. This monster machine is powered by a highly reworked V8. With new elements on it, better turbochargers and much more substantial cooling, the Jan Olsson Audi RS6 disposes with 950 HP when using regular fuel and its engine can churn out more than 1.000 HP with racing fuel. No more talking, please, take a look at this machine in this miraculous video.

Ever heard of Jon Olsson? Well, he is quite a remarkable figure! As a stunt skier and professional skier for Sweden he certainly knows how to steer... 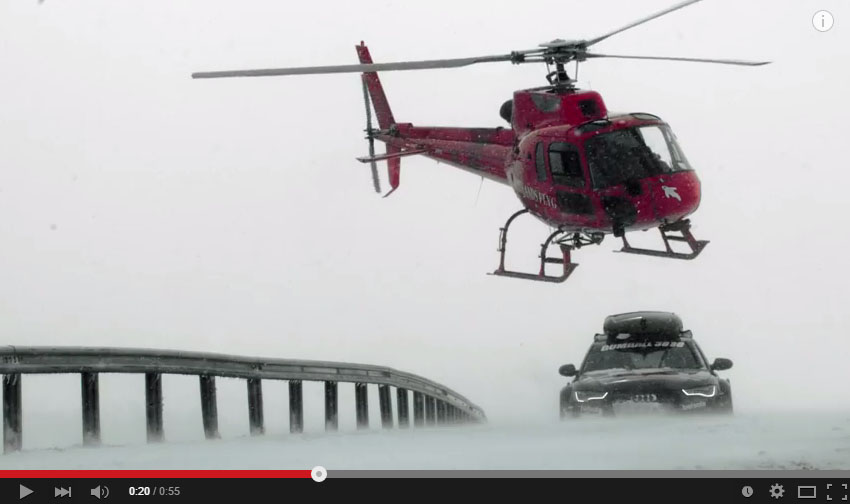