Two weeks ago, a Ford factory in Flat Rock, Michigan, marked a rather important milestone. The production of a very powerful and rather amazing Ford Shelby GT350R Mustang started and the occasion was celebrated by every employee at the factory. The first series production Mustang Shelby GT350R rolled of the line with everyone in the factory cheering from excitement. The executives who actually made all of this happen drove off in a car whose engine sounds like a true winner.

This car isn’t only about being a pony car or a muscle car. It is a vehicle that brings a whole lot of exciting sporty equipment making the Mustang car closer to the excellence level of the European and the Japanese sports car than ever before. New suspension setup, better steering, better MagnaRide Dampers and a comprehensive aerodynamic enhancements were enough to reveal the full potential of the newest Mustang.
The R in the name means something very cool. This is a track vehicle with 130 lbs less weight in comparison with the “normal” Shelby GT350R. To achieve such results, Ford had to resort to radical measures. They removed air conditioning, rear seats, audio system, and trunk lining thus considerably lowering the weight. However, the most important new feature is the engine. Specially developed flat crank V8 develops in excess of 500 HP and makes a glorious sound. Interestingly, some report that the Shelby GT350R hasn’t got an R badge on it. So, no one will know that you sweat inside your ride.

Two weeks ago, a Ford factory in Flat Rock, Michigan, marked a rather important milestone. The production of a very powerful and rather amazing Ford... 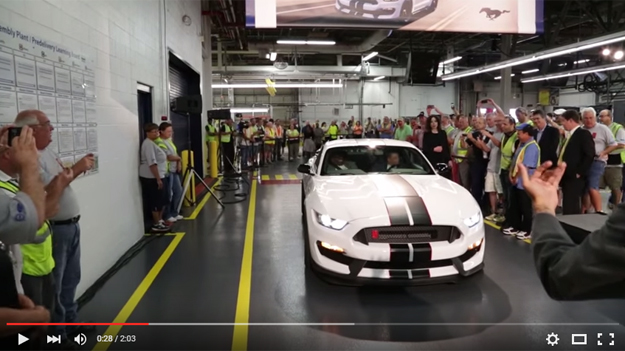