Brits just killed it. Take a look at this awesome showdown of the two of the most amazing things in the world called Vulcan. This is the meeting where the Aston Martin Vulcan met the Avro Vulcan and the result is an awesome short footage and presumably an incredible set of photos taken at the Elvington Airfield in Yorkshire. As one of the most beautiful bomber of all time, the Avro Vulcan has been an aeronautical benchmark for years. It was the pride and joy of the RAF for more than 30 years and now it is being used to showcase the magnificence of British engineering.

This is the bomber aeroplane which inspired the creation of the new Aston Martin Vulcan. It definitely had an influence on the name. As Aston Martin’s CEO Dr Andy Palmer said: “Clearly the Avro Vulcan provided the inspiration for the naming of our most extreme sports car, and I’m delighted that we have been able to unite the ‘two Vulcans’ and deliver our own tribute to this world-renowned aeronautical phenomenon.”
As for the Aston Martin Vulcan – this one is the ultimate representation of insanity and extremism that Aston Martin can provide us with. The awesome car with carbon fiber monocoque wears all the good things you could think of. Composite brakes, limited slip diff, magnesium torque tube, naturally aspirated seven-liter engine with more than 800 HP and awesome aero kit all provide the ultimate driving experience for the driver of a car whose performance is more engaging than that of any other car ever.

Brits just killed it. Take a look at this awesome showdown of the two of the most amazing things in the world called Vulcan. This is the meeting... 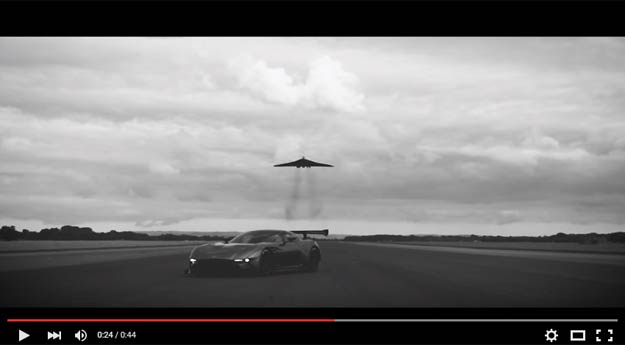