As one of Europe’s most popular cars, the fourth generation Golf really found its place in the hearts of car enthusiasts with its GTI and especially R32 versions. The latter has become something of a holy grail of motoring for Volkswagen fans. The Golf R32 actually introduced new engine technology to us along with the awesome new generation all-wheel-drive based on Haldex clutch. It also brought the incredible DSG transmission we all find quite amazing. Tuners all over Europe and the world are still captivated by the sheer insanity of the Golf R32 and this one, depicted in the video captured at the Drag strip at the GTI Festival at Santa Pod Raceway, shows why. Tuned by HPerformance, the 4Motion Golf R32 received all the necessities to beat a stock Nissan GT-R in a drag race.

Clearly, it didn’t go against the Godzilla, but it did try out its luck against the Audi TTS. With special HPA EFR550 turbocharger, new ECU remapp, a whole lot of cooling, intake and exhaust modifications, HPerfromance upped the power of the 240 HP stock engine to insane 550 HP. That is a lot even for a sports car of today and it is absolutely berserk in a Golf IV. With new elements such as KW Variant 2 coilovers, 19-inch HRE wheels, H&R stabilizers, a custom water cooled intake manifold and new 90mm exhaust pipes, this Golf took on the ¼ of a mile race and catapulted itself to the other end in 12,4 seconds at 112 mph. It must have been pulling some serious Gs from the start.

As one of Europe's most popular cars, the fourth generation Golf really found its place in the hearts of car enthusiasts with its GTI and especially... 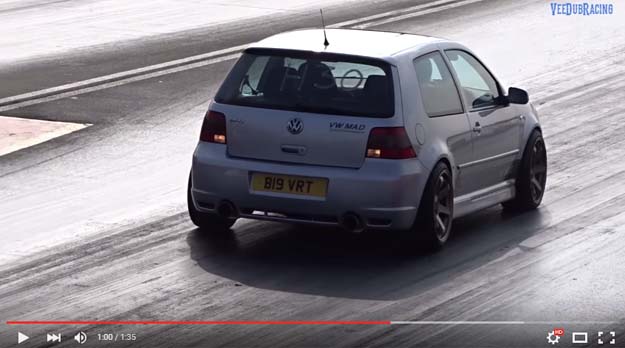