Drag Race culture isn’t powerful and large only in the US. The Swedes are also incredibly well suited for making insane racing cars which are able of reaching some sick ¼ of a mile times. Take a look at this awesome video showing two old Volvos having a blast down a closed highway somewhere near Stockholm. The cars are the real stars here, and the Swedes tuned and modified them as if they were in the US. LS engines inside provide the power to be reckoned with.

If we are right, the older car is the magnificent Volvo 140 Wagon from long long time ago. The chassis used here is definitely upgraded with some serious modern stuff like strut braces, cool roll bar and a whole lot of engineering under the bonnet. The LSx V8 is inside with the Powerglide Automatic tranny at work there. Massive power of 764 HP is so intensively channeled through it that it seems like the car is barely keeping it together when blasting down the straight.
On the other hand, the much more modern Volvo V40 received a 588 Ci Big Block V8 and a whole lot of nitrous shots to keep the things in the right order. The car made the run of its life and beat the old Volvo 140 in great fashion. The second time around, the oldie won. The owner said this car had 700 HP, which is much less than the old one, but weight is also of crucial essence here. Obviously, the Swedes are really into muscle machines too.

Drag Race culture isn’t powerful and large only in the US. The Swedes are also incredibly well suited for making insane racing cars which are able... 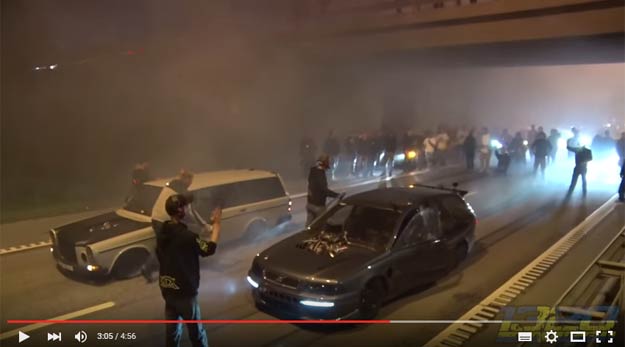