The Tesla Model S P85D was something of a star on youtube. Filmed reactions of people who experienced the insane (literally) acceleration have become a must-watch thing on the Internet and we find it quite hard to think of anything what could top this. However, Tesla Motor Company did find something – an even more powerful Tesla Model S P90D specially adapted to provide even better acceleration for a longer time. Not only did they integrate bigger batteries inside, but the Tesla Model S P90D received a smart fuse tech which enables the batteries to send much more electrons at a higher rate towards the electric motors. This equals to more power and more speed. How much speed!? Well, the P85D succeeded in reaching 60 in 3,1 seconds, while the P90D and its Ludicrous mode can do it in 2,8 seconds. Supercar territory for sure.

The difference between the two is best shown in this video where the mighty P90D simply destroyed the P85D. The 0-60 time was improved but also the Tesla Model S P90D can now achieve 100 mph much faster. Actually, 7,7 seconds are needed while the P85D did the same a second or two slower.
The modern Tesla Model S is the best large electric car ever and it can now quite comfortably compete even with the fastest cars of today such as the Mercedes E-class and the BMW 5 series. Not only is it faster than them, but it also offers more space inside with the luxury to match anything from the Germans. This is not the alternative anymore. The Tesla Model S is a car which can compete with anything out there and this video proves that now it’s even faster than Ferrari and Lambo cars.

The Tesla Model S P85D was something of a star on youtube. Filmed reactions of people who experienced the insane (literally) acceleration have become... 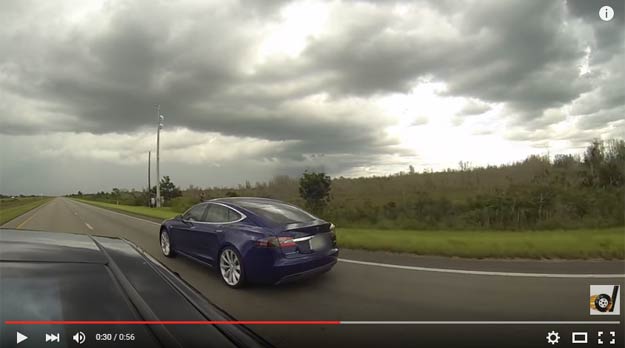