The only place on Earth where the new Honda Civic Type R will be produced is the Honda Swindon plant in the UK. The production of this magnificent new car created to take on the most amazing hot hatchbacks of today started only a few days ago and the presentation of the first cars produced took place right after the production line. Three newly built cars in Red, White and Blue greeted the spectators and marked the beginning of production of a car that has a potential to change it all.

However, the presentation had one slight flop. A guy driving a blue car steered to the left even before he was supposed to so not everything went according to plan. If nothing, the Civic Type R received two rounds of applause. This guy had one job, one job only…
Nevertheless, the 2016 Honda Civic Type R is finally in its full swing and the car is definitely a rather important novelty for Honda. After a long time Honda finally has a car that can stack up against the likes of the Golf GTI, the Renault Megane RS and other similar hot hatches. With its new two liter turbocharged mill producing 310 HP, clever front limited slip diff and adjustable suspension, the vehicle took on the Nurburgring and it smashed it with a 7.50 time.
Only a handful of hot hatches drove over the Green Hell in less than eight minutes and the Honda Civic Type R is one of them.
All in all, here you can see it coming from the production line for the first time.

The only place on Earth where the new Honda Civic Type R will be produced is the Honda Swindon plant in the UK. The production of this magnificent... 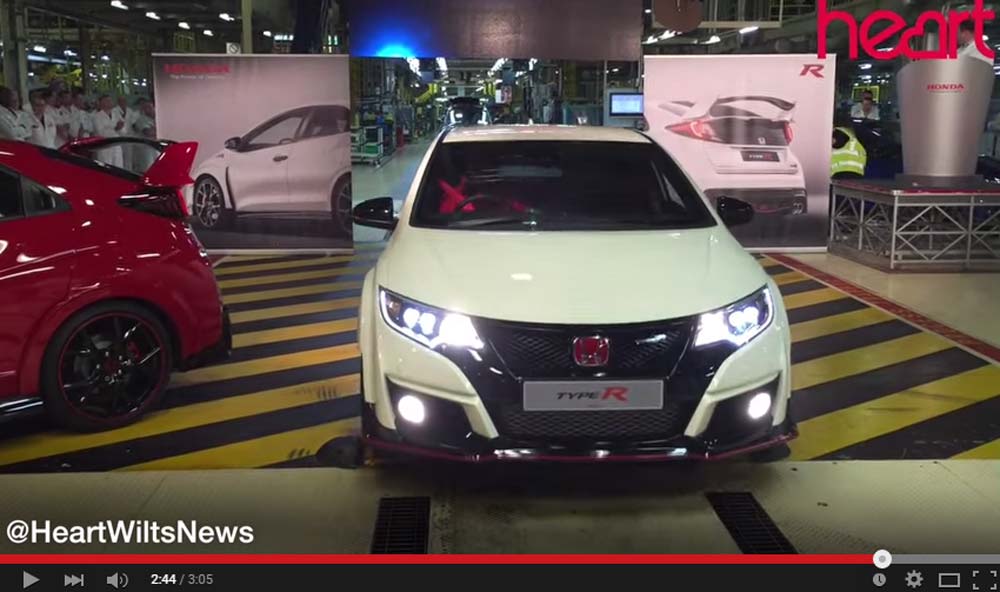