After showing you the introduction video of the new series depicting the Ford Focus RS development and production, we are bringing you the second video in the series “Rebirth of an Icon”. Now, the Ford engineers are in their full swing at the development process and remarkably, on the verge of destroying quite a few Ford Focus RS cars for the sake of making them ever so safer. As depicted in this five minute video,the design team has been designing the car from the scratch up for months and after they’ve achieved all they wanted to in the terms of design the safety, testing was the next step in the process.

Despite the fact that it is painful to watch all these awesome machines being crushed directly into steel poles and concrete walls, Ford had to crash test 28 (we didn’t make a mistake, it really is 28) units of the Ford Focus RS to make it safe all around and to make it eligible for the market. Everything has been made in the Ford Crash center in Cologne, Germany, where a team of special technicians crash tested the cars at a rate of one car per day.
Making the Ford Focus RS even more appealing for the masses and for car enthusiasts, the Ford team decided to have a special consultant on board. Ken Block, the Gymkhana superstar, was chosen and he gave the final input on car design and on the driving characteristics thus ensuring that the Ford Focus RS is a top notch performer like no other car out there. He liked the car so much at the first glance, that he said right away “I wouldn’t change anything on it.”

After showing you the introduction video of the new series depicting the Ford Focus RS development and production, we are bringing you the second... 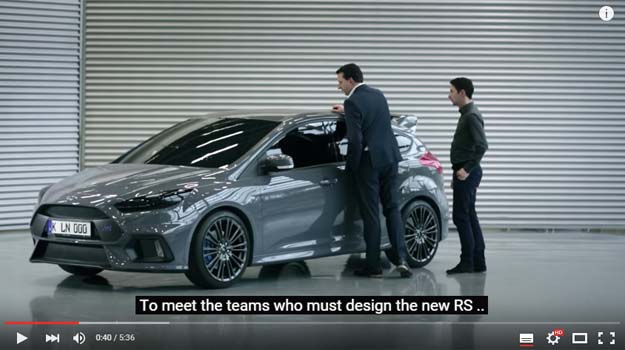