Some say that the Ferrari F12berlinetta has more power than it really needs. Now, when a car has 730hp it does seem like an overkill, but this is a Ferrari and they have to be above all other cars. However, instead of creating a car with similar power but less weight they have created a machine with even more power but also with an awesome tech to tame it all. This is the Ferrari F12tdf (Tour de France). It has an engine with 770hp, it has RWD, it has 110 lbs less than the usual F12berlinetta and it has a system which steers all four wheels. Ferrari calls it Virtual Short Wheelbase (Passo Corto Virtuale) but it is actually a rear-axle steering system.

What it does is steer the rear wheels and enable the car to have a better cornering speed, shorter U-turn radius and much safer driving experience. Now, considering that the car lost some weight and gained some muscle, this tech is, quite frankly, necessary. Only 799 units of it will be produced, thus making the F12tdf a perfect counterpart to the Lamborghini Aventador V12. Just think about it, both are V12, both are rather large and both come from Italy. True, the Aventador has a totally different layout, but you get the point.
In this video, you can see the biggest advantages of the Passo Corto Virtuale system and it seems that it works quite well. As for the performance of the new car – 0-62 under 3 seconds and the top speed of 217 mph (probably even more).

Some say that the Ferrari F12berlinetta has more power than it really needs. Now, when a car has 730hp it does seem like an overkill, but this is a... 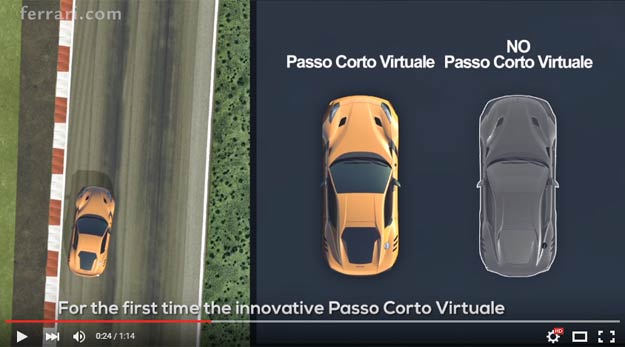