The Golf 16Vampir is like a holy grail for the Volkswagen Golf fans. That is the car which makes all the fuss on the drag strip and gives Volkswagen fans the right to brag about something. Despite its small engine this thing is known to smoke some seriously fast supercars on the drag strip. The magicians that made it so powerful were actually so enchanted by the potential of the installed engine that they’ve upped it to 1.053 HP. That is more than you get in a Veyron. We can make one more connection with the ultimate car – a four wheel drive system.

True, the system wasn’t sourced out from Veyron, but from newer Volkswagen car, but in essence it is the same Haldex 4Motion system used by the Veyron. That means all the power of the small four cylinder engine can be transferred to the road with ease. However, the 16Vampir didn’t stop there. The man behind it wanted more power and now he got it. Final version of the two liter beast develops 1.233 HP and enables the Golf MK1 with some sick performance. How sick, you may ask. Well, to picture the level of “nuts” in this thing we have to call up Koenigsegg. Their newest car the Regera will supposedly accelerate from 62 mph to 124 mph in around three seconds. Guess what! The Golf 16Vampir can do the same and here we have an astonishing video of it accelerating as the ultimate proof.
This sleeper definitely shows up what it is capable of. With installed Garrett GTX4202R turbocharger working at incredible 3,4 bar of boost, the engine is capable to deliver massive amounts of power through the six speed manual gearbox. Rolling start is sometimes necessary because the tires on this thing simply cannot cope with all the power they have to transfer. So, basically, this thing accelerates from 62 mph like a Lamborghini Huracan from 0.

The Golf 16Vampir is like a holy grail for the Volkswagen Golf fans. That is the car which makes all the fuss on the drag strip and gives Volkswagen... 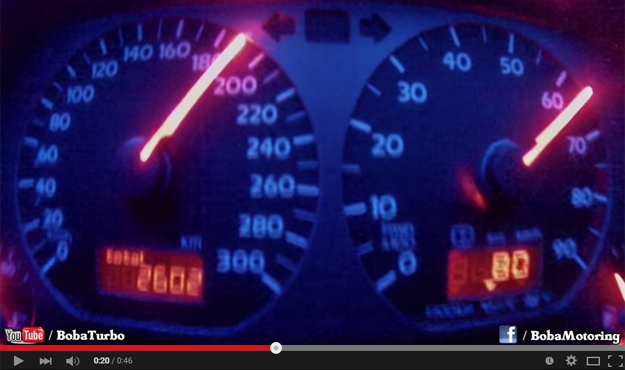