Ever since the inception of muscle cars, quarter of a mile races became increasingly popular in the US. First, the races were held on the streets. Illegal races between lights were so popular that manufacturers developed and produced cars specially developed for maximum acceleration. Power, of course, was the only answer so the production of insanely vulgar muscle machines was crippled only by the oil crisis in the Seventies. After that, nothing had been the same and the cars were largely produced with much smaller, less powerful machines. This one – the Dodge Omni is one of these machines and it was rather popular with almost 1 million units produced from 1978 by 1990. Only four cylinder engines were inside and no wonder why this cheap car received a rather nice aftermarket treatment which eventually lead to this – the magnificent Omni GLH 5-Speed which can run a quarter of a mile in less than 10 seconds.

Pictured at the Drag Week, this Dodge Omni with a four banger (not a Hellcat lunacy), a Daytona transmission, large front wheels and lightened body hit 143 mph on a ¼ of a mile race at 9.99 seconds time. This was enough for the magnificent car to become the fastest Omni of all time. With GT35/82 Turbocharger giving 38 pounds of boost to the small four banger, the Dodge Omni has the power to get in the league with the big boys. Obviously, the creation of such monstrous race machines requires a lot of dedication, time and money indeed. It is simply awesome how the team was thrilled when they achieved the magnificent 9,99 second pass. This is a sub 10 second car.

Ever since the inception of muscle cars, quarter of a mile races became increasingly popular in the US. First, the races were held on the streets.... 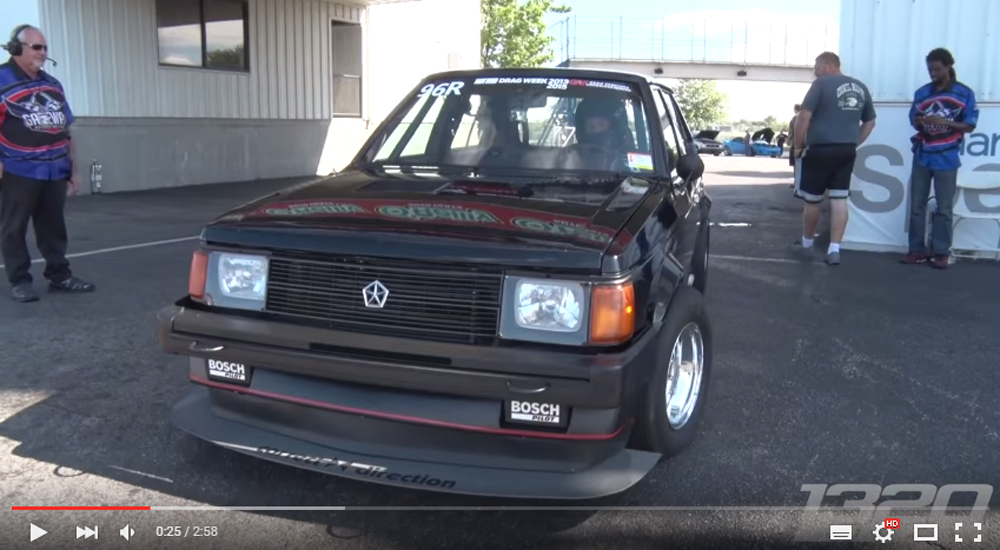