This is a big one. BMW Motorsport released their newest car and it is so mesmerizing they have made an awesome video depicting it. Hanging on with the legendary BMW M3 E30, and the old gen BMW 1 series M Coupe, the M2 had a blast on the track. The official launch film depicts the most important features of the car and you do not have to be a rocket scientist to figure out this Motorsport child is capable enough to be considered a brother of the most impressive BMW cars in the offer.

It does some serious drifting. With Active M rear differential, M-tuned chassis, superb steering, exquisite double clutch gearbox and awesome grip, its six-cylinder engine with TwinPower Turbo technology can spin up the wheels quite outrageously. The results are the most spectacular drifts you have ever seen and BMW is not afraid to show that up.
The car is the size of the BMW e36 Coupe, it has 1.495 kilograms, an engine with 365hp and 500 Nm of torque. Sheer numbers are enough to tell you the story about passion and excitement, but when you see it in action with its beloved predecessors, it excels. The fastest version with all the bells and whistles is capable of accelerating to 62 mph in 4,3 seconds – faster than any other modern hot hatch. Also, the engine will gladly keep on pushing the M2 all the way to 155 mph, or even more when you order it with the special package delimiting the top speed.
As ever, weight distribution is as close to 50:50 as possible giving the M2 an incredible balance and poise weather just driving or racing in the world’s best tracks.

This is a big one. BMW Motorsport released their newest car and it is so mesmerizing they have made an awesome video depicting it. Hanging on with... 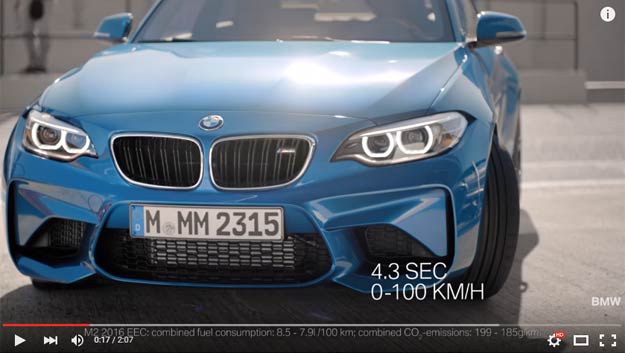