If you’ve ever wondered about the real difference between a Mega car and a sports car then the video embedded here will definitely shed some light on your questions. A drag race between the Audi R8 GT Spyder (a seriously fast car) and the massively more powerful Koenigsegg One:1 will leave you speechless. It is quite incredible how a sports car – or even a supercar – feels tiny and almost dull compared with the best from Koenigsegg.

Audi driver did a magnificent job of launching the car the best way possible. The grip of all four tires simply kicked the R8 in front of the Mega car, but merely three seconds later, the Koenigsegg One:1 got its stuff together and the annihilation started in a fashion one wouldn’t believe possible. With the power of 1.361 HP and the weight of 1.361 kilogram (2,998 lbs), the Mega car is definitely more powerful than anything Audi will ever put in the R8. Actually, just to prove the point, we will tell you the Audi R8 GT Spyder has a V10 engine with 560 HP, it weighs 1.800 kilograms (3,970 lbs) and despite the four-wheel drive and launch control on board, it is simply unable to reach anything the Koenigsegg will easily do. As a matter of a fact, this sick car broke the record on the Suzuka and on the Spa-Francorchamps. It’ll probably shatter all the records at the Nurburgring as well. We only have to wait.
The tech and science behind this is simply mindboggling. Every single part of the Koenigsegg One:1 is carefully developed and designed to provide the best possible performance and enable it to be the fastest car to ever grasp the Earth. Is it?

The Awesome Koenigsegg One:1 Annihilated The Audi R8 GT Spyder In A Drag Race

The Awesome Koenigsegg One:1 Annihilated The Audi R8 GT Spyder In A Drag Race

If you’ve ever wondered about the real difference between a Mega car and a sports car then the video embedded here will definitely shed some light... 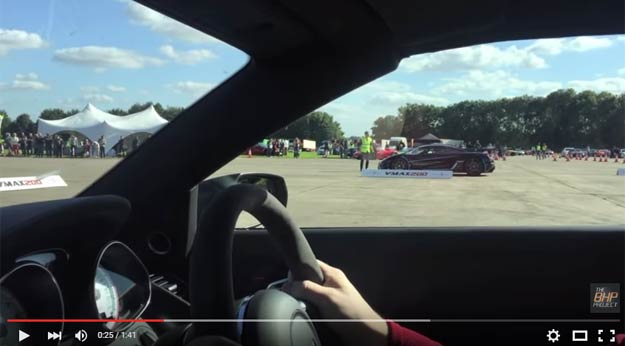