Talks about the Tesla Model S P85D and the Dodge Challenger Hellcat will never stop. These two are the best America currently offers and while both cars have similar performance it is rather incredible how they differ in every single way imaginable. One is a classic American musclecar brought to the extremes with the installation of the supercharged eight cylinder engine, while the other is a modern, absolutely amazing electric vehicle with insane power coming from its electric motors to all four wheels.

Although there have been a few races between these two, this time we get some real science. The guys from the American Consumer Reports took the Tesla Model S P85D and the Challenger Hellcat and fitted them with a fancy accelerometer to do some science. Next, they’ve hit the track where they’ve calculated the maximum G-force that these things produce when accelerating and measured the time they needed to hit 30 mph. This test proved that four wheel drive and instantaneous power of the electric motors are more than a match even for high-performance supercharged American muscles like the one in the Hellcat.
Amazingly, the Tesla Model S P85 D pulled a 1.03 G when accelerating. To put things into perspective, this thing’s acceleration to a certain speed is faster than the one that would be reached by a person jumping from a tall building. 1.3 seconds is needed for 30 mph. The Challenger couldn’t do that. It needs one second more to hit 30 mph and it can pull 0,83 of a G while accelerating. Of course, the Tesla Model S runs out of accelerating frenzy a bit faster, but the truth is that it is still faster than the Hellcat to 60 mph and even more. All in all, after watching this you’d like to have a go in that Tesla, wouldn’t you? The presenters said it is so incredible that the only thing you can really understand the level of madness involved is to try it out.

Talks about the Tesla Model S P85D and the Dodge Challenger Hellcat will never stop. These two are the best America currently offers and while both... 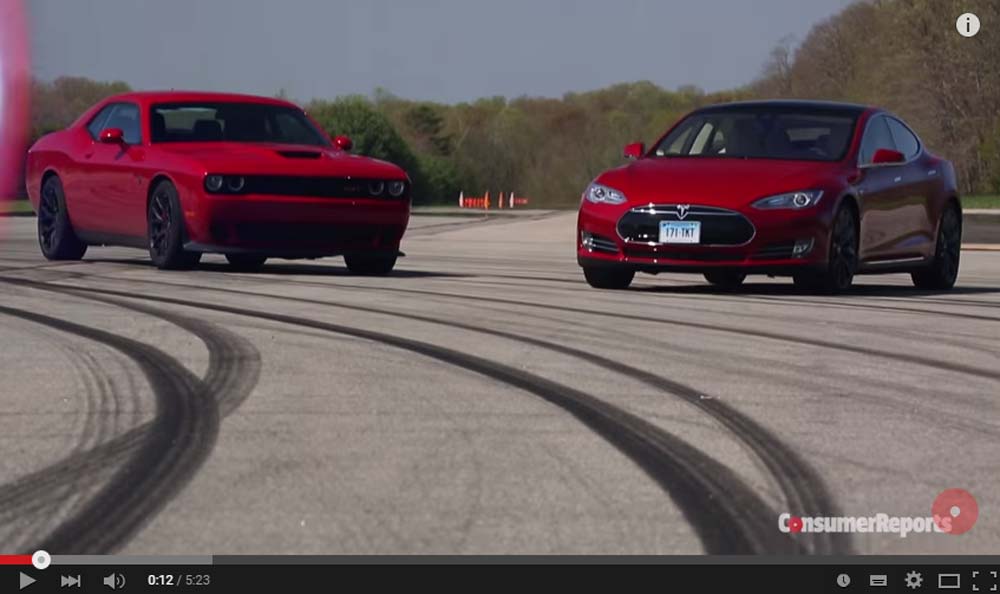