We have been waiting a long time for the appearance of Tesla’s next big thing – the Model X. A few test prototypes were seen lurking around California and the last sighting at the 280 South in San Jose revealed that the Model X is probably in its final development phase before unveiling. We do know if they’ll reveal it later this year and it will be a car with a number of interesting elements including the first version of the autonomous drive. According to latest information, the buyers who already reserved the car and ordered it from factory, will be the first ones to get it.

While we have been waiting for proper news about the new Tesla Model X to come out, the team have been working their asses off to make is as good as possible. Now, we know that the Model X will receive top notch propulsion system, four wheel drive and its most powerful version will probably have batteries of 90 kWh of capacity and engines good for 762 HP (check out its predecessor). The same system is in the newest iteration of the Model S – P90D and it enables the large sedan to accelerate to 60 in as low as 2,8 seconds (on pair with the best supercars of today).
Tesla obviously offers incredible cars for the money and if you put everything in the contest, the Model X might be the best SUV out there. It will compete with cars such as the Cayenne Turbo S, the X5M and the GLE 63 AMG, but it will be faster than any of them. It is estimated that the best Tesla Model X will accelerate to 60 in 3,3 seconds which is quite outstanding.
The price of the thing will surely be north of $100.000. Possibly, the entry level car will fetch 10 to 20 grand less, but the top notch version will be rather high priced and we aren’t even mad about it. This thing will be expensive, but it will be better than the competition no question there.

Test Prototype Of The Tesla Model X Caught On The Roads

Test Prototype Of The Tesla Model X Caught On The Roads

We have been waiting a long time for the appearance of Tesla’s next big thing - the Model X. A few test prototypes were seen lurking around... 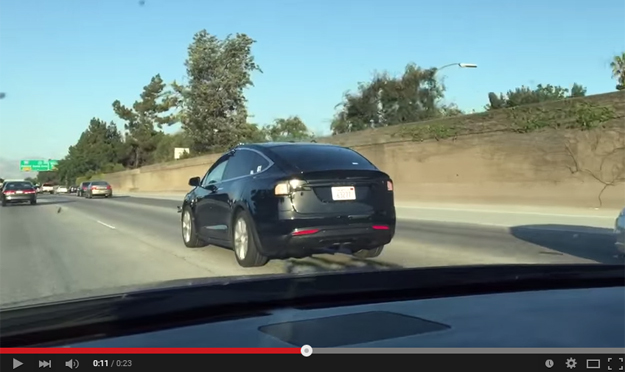