The Tesla Model S is possibly the best electric car there is. It’s big, it feels premium and upmarket, and its adequately priced. However, tuners do not really know what could they do with it. The electric engine cannot be enhanced as easily as the internal combustion unit and the tuners practically hit the wall when they try to enhance the driving characteristic of the Tesla Model S. However, they can affect the looks, the aerodynamics and possibly the suspension. RevoZport is one of the most famous tuners which provide various tuner kits for all sorts of vehicles. Now, with the new tuning kit made specifically for the Tesla S, RevoZport will try to enhance the aerodynamic characteristics of the car and to make it more slippery going through air. This has been done by integrating front and back bumper designed and sculpted in the air tunnel. The exterior look have been enriched by the installation of an all new front splitter and a rear carbon diffuser as well as rear spoiler.

Everything looks a bit more sporty now.The Tesla Model S somehow looks like an Aston Martin up front. Large blackened surface apparently mimics the grill found on those great British cars. Besides adding a wonderful body kit, RevoZport offers a rather nice looking 22 inch Klassen ID wheels. They are large and surely make the Model S much less comfortable inside. However, everything looks a bit more aggressive and even more serious with the large wheels.

The interior has been slightly modified also. The central tunnel received an extension which sports an iPad Mini holder and a two cup holder. It looks nice and it fits the Model S like a glove. 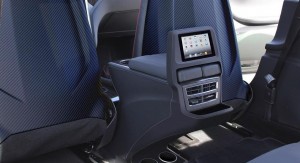 All in all, RevoZport made a tuning kit for the Model S, but the electric engine and the batteries remained the same. That is not a bad thing because the stock Model S is very fast and engaging to drive.

The Tesla Model S is possibly the best electric car there is. It’s big, it feels premium and upmarket, and its adequately priced. However, tuners...