When Toyota announced that they are going to introduce a whole new sports car (which became the GT86, the Scion FR-S and the Subaru BRZ), the whole motoring world just stopped for a second. Then, Toyota announced that the engine powering their new car will be just a naturally aspirated two liter unit, which is a bit sad. With only 200 HP, the trio from Japan really never caught up, but its driving characteristics, affordability and strange look made it a rather popular car of choice for young motoring enthusiasts.

However, those wanting more had to do something with that small engine. Some Turbocharged it, some swapped it with crazy ass american V8, while these guys from Japan fabricated a whole new propulsion system using two high revving motorcycle engines. The engines were sourced from the Kawasaki Ninja ZX-12R. Fusing together two 1,2 liter Kawasaki engines, the tuners basically made a one of 2,4 liter V8 engine that churns out 367 HP at the wheels.
This kind of power is enough to really make a monster car out of this JUN BRZ. We are not acquainted with the performance data, but it seems that JUN BRZ is as fast as it sounds and at 11.000 rpm it sounds Biblical. Despite getting a whole new engine inside, the transmission remained the same as well as rear wheel drive layout, which means that the whole process might not be as complicated as it seems. Of corse, JUN had to fabricate mounts, exhaust and adapt the electronics to use two straight four engines instead of one boxer.

This Subaru BRZ Can Revv Up To 11.000 rpm And It Sounds Awesome

This Subaru BRZ Can Revv Up To 11.000 rpm And It Sounds Awesome

When Toyota announced that they are going to introduce a whole new sports car (which became the GT86, the Scion FR-S and the Subaru BRZ), the whole... 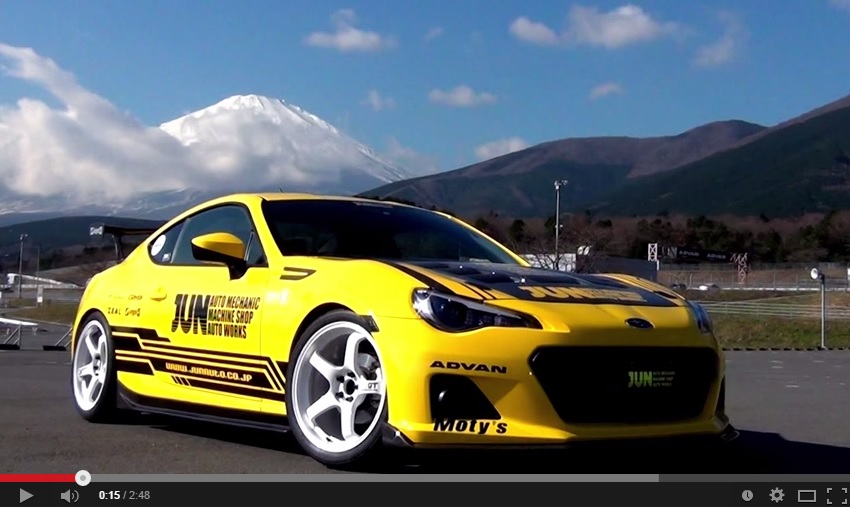