We have seen thousands of great well thought out car commercials over the years and this one coming from smart (that company that builds mini cars) is no different. Proposing a novel (sort of) approach to car design, smart created a commercial in which they depict the possibility of driving a smart car on the railway. It is a concept of transportation which was actually used for some time in some parts of the US, but now, smart is looking to bring it to urban areas. Of course, everything is just a joke, but smart actually created a car with wheels for the rail and they’ve filmed it on it.

However, car named forrail might even show us a glimpse of the autonomous possibilities we have today. Here, it is shown that the guy inside the car reads newspaper and does the usual stuff not related with driving. If you remember a few videos about autonomous cars, the people showed inside those were doing just that but they have been driving on the roads. What we are saying here is that we could have some sort of private autonomous transportation on the railways, but the thing couldn’t work now actually.
What works on the other hand is the smart forfour. That is a small rwd citycar with small rear positioned engines and a quirky styling definitely showing its strange character. Making its way on the railway definitely showed that Daimler thinks of it as it’s a small fun car with adventure on mind. We can’t even compete with that. They are true. This thing is a lot of fun. Only, we would like to see it with the engine more powerful than 100 HP. Imagine it with RWD, low weight, high powered engine and a sticky tires at the back. Awesome!

We have seen thousands of great well thought out car commercials over the years and this one coming from smart (that company that builds mini cars)... 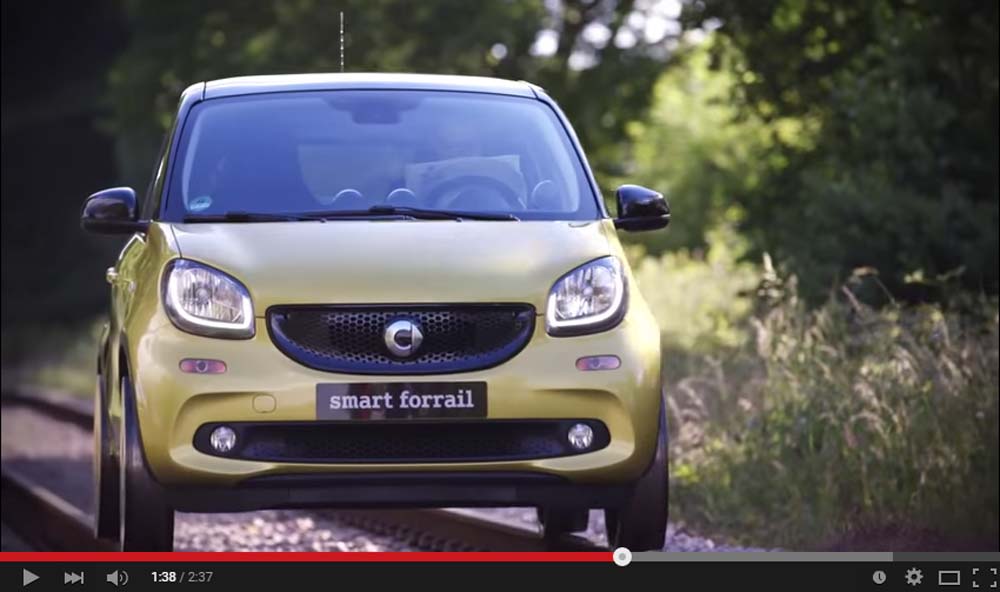