Skoda has been in the auto industry for quite some time but this will really surprise you…for nearly 110 years they are involved in the motorsport industry!  They also had the chance to grab a brilliant victory at the recent International Rally Championship or the IRC.  To celebrate these two grand events they have released a limited edition of the Fabia RS which is actually inspired by their winning rally car, the Fabia S2000.

This little car comes in racing statuesque.  It has a mix of white and rally green paint wildly wrapping the Fabia RS, this also features stickers from the winning S2000 and stands on a white 17 inch alloy wheels and uses the state of the art XDS breaking system which maximizes torque when it comes into corners.

The powerplant of this inspired rally car is a 1.4 turbocharged 4 cylinder engine which can breathe 177 bhp with 184 lb ft of torque.  This engine is teamed up with a DSG 7 speed transmission and the combination allows this car to run from 0-100 km/h in just 7.3 seconds until it reaches a top speed of 224 km/h.

This will also come in limited numbers as it was revealed that only 200 units will only be produced to commemorate their excellence in the motorsport industry. 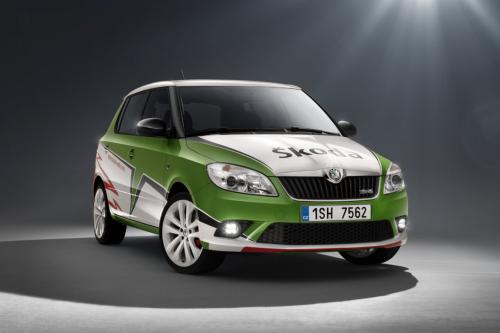 Skoda has been in the auto industry for quite some time but this will really surprise you…for nearly 110 years they are involved in the motorsport...