RUF had their hands on the infamous Porsche 911 and as car tuners always have in mind…they made this sports car into an insane creature.  They have given the 911 one wild power with of course stunning looks that will let everybody take a second look at their masterpiece.  They have dubbed this as the RUF Rt 12.

They have fitted this with aerodynamic package made up of carbon fiber materials which include a massive rear wing, front mudguards and a modified hood. To further reduce the weight they have replaced the doors with lightweight aluminum doors and have used high grade plastic material for its side and rear windows.  There is also an optional carbon fiber roof to help reduce its weight.

The interior was introduced with a headliner Integrated roll cage with cross brace and have used carbon fiber bucket seats.

The 3.8 liter Boxer engine is now tuned to madness by installing a twin turbo upgrade to get serious power that is set at 720 bhp with a massive 693 lb ft of torque.  It has a six speed manual gearbox sends power to all of its four wheels but can also have an optional setting of rear wheel drive. 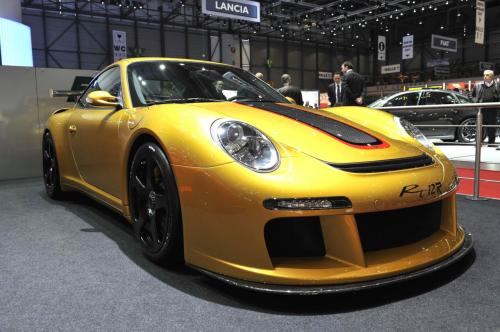 RUF had their hands on the infamous Porsche 911 and as car tuners always have in mind…they made this sports car into an insane creature.  They...