The Ferrari 458 Italia is a car that sets standards. After Ferrari released it and the whole motoring world praised it, amateur car tuners wanted only one thing – to build something which would kill it on the track – real track or a drag strip, whatever. And after many years of winning and losing, the Ferrari 458 Italia had been put against the car no one thought it would ever run against – the Volkswagen B2 Passat Diesel. This, of course isn’t just any diesel, but the 458 Italia, we have to say, is full stock with the engine developing something like 570 HP and the acceleration capabilities of 3 seconds to 62 mph.

The Passat had some modifications done to it. First of all, the four wheel drive system is sourced from the more advanced cars of today. It is safe to assume that the 4Motion from newer Passats and Volkswagens was utilized. That said, the engine is somewhat different. Old 1.6 liter diesel engines don’t cut it here, but the newer may be powerful enough to make this Passat intense enough. According to some sources on the Internet, the engine inside is a famous 1.9 liter TDI Volkswagen diesel engine. They are known for durability, but some of them have been actually tuned to develop berserk amounts of power. North of 400 HP, we think. This one isn’t different. Rolling coal and smoking Ferrari 458 Italia isn’t something you can see every day and this Passat definitely made its mark on the drag strip.
True, the Ferrari almost caught up at the end of the race, but the crowed cheered for the ultimate sleeper Passat.

The Ferrari 458 Italia is a car that sets standards. After Ferrari released it and the whole motoring world praised it, amateur car tuners wanted... 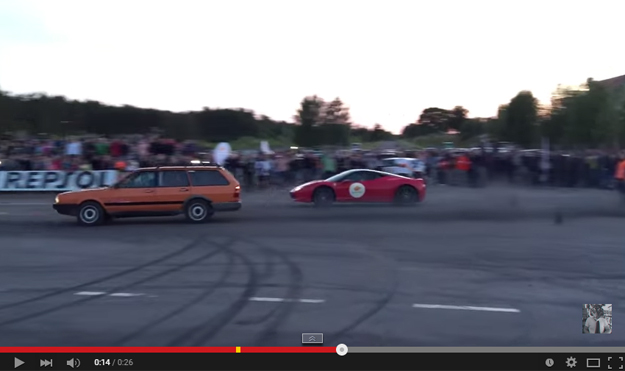